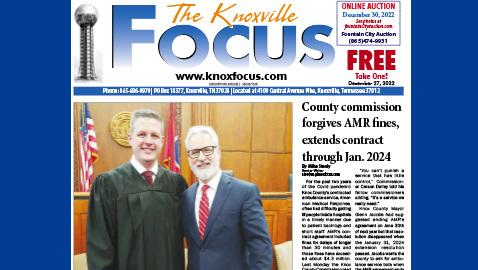 Just about every judge in East Tennessee was present to watch Kyle A. Hixon take the oath of office as a judge of the Tennessee Court of Criminal Appeals. Hixson was appointed to the post by Governor Bill Lee, who was on hand to administer the oath of office. Most of the Courthouse came out to witness the ceremony, which was held in the ornate main courtroom in the Supreme Court Building, the former downtown post office.

Hixson’s family—his parents and uncle, as well as his in-laws—were all gathered to witness the thirtysomething former prosecutor take the oath of office December 15. Standing beside the judge were his beautiful wife, Rachel, and their three daughters. The Hixson daughters all had matching pink bows in their hair. Indeed, the two elder Hixson daughters made quite a hit by leading the Pledge of Allegiance.

The ceremony began by being gaveled to order by Knox County’s High Sheriff Tom Spangler. Sharon Lee, justice of the Tennessee Supreme Court, presided with grace and good humor and recognized a host of judges and public officials after a moment of silence for Judge John Everett Williams who had passed away. Chief Justice Roger Page made brief, but very gracious remarks, saying Kyle Hixson had a superlative work ethic which he believed is necessary in a good judge.

A farm boy who went to the University of Tennessee College of Law, Kyle Hixson worked for years as a deputy district attorney under Attorney General Charme Allen. Hixson ran a determined campaign to win a seat on the Knox County Criminal Court bench. Hixson faced a credible opponent in the Republican primary, which he won by an overwhelming majority. It was an impressive victory for a young candidate. Hixson’s friendly demeanor and record as a deputy district attorney general made him an appealing candidate. Considering the number of judges gathered at Hixson’s investiture ceremony, the number of roofs with snow on top emphasized just how quickly Kyle Hixson has risen in the legal profession.

After Chief Justice Page introduced Governor Bill Lee, it was easy to see why Lee was so easily reelected this year. The governor’s own comments were brief, to the point and sincere. In fact, whether in making remarks or shaking hands with Tennesseans, the quality that one detects about Bill Lee right away is sincerity. Indeed, Governor Lee radiates sincerity. After a few remarks, the governor administered the oath of office to Kyle Hixson.

Among those who attended the investiture ceremony was Knox County Commissioner Kyle Ward, whose wife, Katie, is best friends with Rachel Hixson. The two Kyles, Hixson and Ward, would normally babysit the Hixson daughters while the girls went out. Now the Wards have their own child and Antonio will likely learn to fend off the girls. Other members of the county commission attending were Gina Oster, Kim Frazier, chair Courtney Durrett, and Richie Beeler. The clerks of the courts were present: Charlie Susano, Clerk of the Circuit, Civil Sessions, and Juvenile Courts and Mike Hammond, Clerk of the Criminal and Fourth Circuit Courts. Register of Deeds Nick McBride, County Clerk Sherry Witt, and Property Assessor John Whitehead were there as well. The Knox County Board of Education was represented by Betsy Henderson.

Fellow Knox County judges attending were Circuit Court Judge Jerome Melson, Sessions Court judges Chuck Cerny and Judd Davis, and Hixson’s former colleagues on the Criminal Court bench Scott Green and Steve Sword. Attorney General Charme Allen was clearly delighted to see her protégé sworn into office. Judge Kristy Davis, another Knox County judge promoted by an appointment by the governor to sit on the Tennessee Court of Appeals to fill the vacancy left by the resignation of the late Charles Susano (father of the clerk of the same name), was circulating through the crowd. Judge Davis has also made an application for a seat on the Tennessee Supreme Court when Justice Sharon Lee leaves the bench. Chancellor Chris Heagerty was present as were both mayors, Glenn Jacobs for Knox County and Knoxville City Mayor Indya Kincannon.

Former congressman Jimmy Duncan patiently stood and shook hands with his host of friends and admirers. As Justice Sharon Lee reminded those present, Jimmy Duncan had served as an elected judge of the Knox County Criminal Court before being elected to Congress.

After the ceremony was over, Judge Hixon and Governor Lee greeted just about everyone present. Both the judge and the governor were good-natured in posing for photos and shaking hands.

One admirer stated he believed Kyle Hixson was a good bet to sit on Tennessee’s Supreme Court one day. After a pause, he added, “And if Tennessee ever gets another seat on the U. S. Supreme Court, it could be Judge Kyle Hixson.”

Nobody attending the ceremony doubted it.