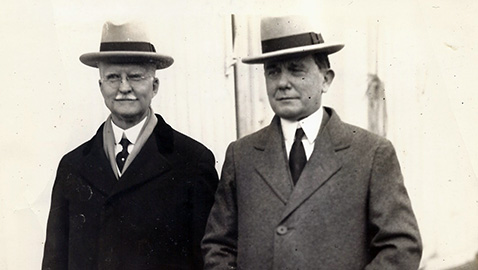 Lawrence Davis Tyson, Tennessee’s junior United States senator, was a wealthy former general, industrialist and newspaper publisher. Tyson and his wife, the former Bettie McGhee, lived in a beautiful home in Knoxville. Senator Tyson, tall, with a full head of white hair and neatly trimmed moustache, was especially interested in matters relating to the military and veterans. Both of Tennessee’s senators were involved in a desperate effort to save the life of Bennett J. Doty. Doty had been a veteran of the First World War, enlisting when he was only seventeen, and was facing death by firing squad after having served in the French Foreign Legion. The American soldier of fortune was serving in the Legion under the alias of “Gilbert Clare” and had been cited for bravery during fighting against the Druz tribesmen in Syria. Doty was the son of a Memphis attorney and was accused of having led a mutiny and firing upon French soldiers. Tried and convicted, the mutineers were sentenced to death. Once alerted by Doty’s family in Tennessee, senators Kenneth D. McKellar and L. D. Tyson did all they could to save the life of Bennett Doty. Senator Tyson personally visited the French Embassy in Washington on Doty’s behalf. Senator McKellar worked feverishly with the State Department to spare Doty’s life. McKellar convinced Secretary of State Frank Kellogg to dispatch a telegram to the French government on Doty’s behalf. Kellogg promptly contacted the American ambassador in Paris, former Ohio governor Myron Herrick, instructing him to intercede with the French government to save the life of Bennett Doty.

When visiting the French Embassy, Senator Tyson spoke with the counselor, who agreed to cable Paris and give the young American every consideration. McKellar and Tyson used every means possible to save Doty’s life. The senators noted Doty’s “erratic” behavior was likely the result of trauma from having been under intense artillery fire during the World War. McKellar and Tyson insisted execution of the boy was too harsh a punishment for a situation that was, at best, quite confused. Tyson was especially concerned as Doty had served in the regiment he had commanded during the First World War. Bennett Doty was accused of desertion and legal experts noted American citizens who enter foreign military service and take an oath of allegiance forfeit all rights to the protection of the United States government. The fine points of the law did not stop either Senator Tyson or Senator McKellar from pressing hard to spare the boy’s life. It was due to the pressure from Tennessee’s U. S. senators that the American Consul in Damascus sought to make certain Doty had legal counsel. There was still hope for Bennett Doty due to the fact any execution required the consent of the President of France.

Young Bennett Doty had been working in New Orleans, unloading boats laden with fruit when he had first heard of a war raging in Morocco. Enlisting in the French Foreign Legion, the Tennessean had arrived too late in Morocco to fight, but was sent to Syria to help quell a rebellion there. Doty was awarded the Croix de Guerre, but apparently deserted along with two Englishmen. Captured by French authorities, Doty was spared the death penalty largely through the efforts of senators McKellar and Tyson, who managed to fan the flames of public opinion, as well as push the American government for intervention on Doty’s behalf. Neither Tyson nor McKellar were able to keep Doty out of prison and he served for a time in a military prison in Albertville, high in the Alps. Bennett Doty, only twenty-six years old in 1927, was pardoned by the French government after serving two years and nine months of a sentence that had originally been eight years. Doty insisted he had deserted because he had been homesick.

Doty may have also become disillusioned when he allegedly encountered an especially brutal sergeant in the Foreign Legion. The Memphis Commercial Appeal had taken up Doty’s cause and the editor of the newspaper admitted, “Doty committed the two gravest offenses which any soldier of any nation can. He not only deserted but led a ‘rebellion’ as the French term mutiny.” The editor of the Commercial Appeal acknowledged Doty having “fired upon the troops who were sent to capture him and five companions is almost unforgiveable in the eyes of military law.”

Apparently, Bennett Doty had always been a handful, as he had been the leader of the “Evergreen Gang” in Memphis as a youngster. The Evergreen Gang was “the terror of other lads of their age.” In a letter written to acquaintances in Paris, Doty said, “I cannot stand being idle. After the World War I went home, but I found life too dull and so I joined the French Foreign Legion.” Doty related he finally got to Syria and he reveled that there had been “plenty of action” initially and he readily confessed he had been “happy with the work” and especially enjoyed being associated with “men from all corners of world”, all of whom “loved adventure and loved to fight.” Once peace had been restored, Bennett Doty became bored and suddenly decided “the heat of the desert” became “unendurable.” Doty had readily answered when asked why a young American would travel half way around the world to kill rebellious tribesmen, simply, “Love of adventure.”

Doty wrote that “in a weak moment” he and two Germans and an Englishman “quit camp.” Doty said the hardest thing he had to bear was the stigma attached to him as a deserter. “I never had been a quitter before,” Doty declared. “I never shall be a quitter again.” Bennett Doty closed the letter, saying he did not wish to be released from the French Foreign Legion, but rather wished to serve out the remaining four years of his enlistment agreement. Prophetically, Doty wrote, “I am much happier with the Legion than I could ever be at home, with peace and inaction.”

Eventually, Bennett Doty returned to Memphis and denied he was to have been executed. The young soldier of fortune evidently made an attempt to settle down and when his parents moved to Biloxi, Mississippi, Bennett moved as well, attended Tulane and earned a law degree. Doty began the practice of law in Biloxi, but apparently it was not exciting enough to suit him. Without a word to his parents, Bennett Doty simply disappeared. Friends said they saw him in New York and Doty said he was leaving for Spain to fight with the Abraham Lincoln brigade against General Francisco Franco in support of the loyalist government. At some point in his checkered career, Bennett Doty worked as a reporter for the Nashville Tennessean. Doty also wrote a book about his experiences in the French Foreign Legion bearing the colorful title, Legion of the Damned.

By 1946, neither of Bennett Doty’s parents had heard anything from their son and his whereabouts remained a mystery. Doty’s restless spirit and thirst for adventure had gotten the better of him.

Decades later, it was discovered Bennett Doty died in a hospital near Gandesa, Spain on April 4, 1938. Doty died from “chest wounds” following Loyalist troops having been routed by General Franco’s forces. Bennett Doty’s love of adventure had finally brought an end to his young life. Sadly, neither of Doty’s parents lived long enough to discover what had become of their son.

For better or worse, Senator L. D. Tyson never lived to see young Bennett Doty squander the opportunity he had been given for a second chance at life. Senator Kenneth McKellar lived much longer and won a sixth term in the U. S. Senate in 1946 and it is interesting to speculate whether the case of Bennett Doty ever crossed his mind.

The Bennett Doty affair was but one of many instances where Tennessee’s senators attempted to help a fellow Tennessean. Senator L. D. Tyson resumed his comfortable life and tended to his duties in the Senate. While in Knoxville, Senator Tyson predicted there would be a third-party effort once again in the 1928 presidential election, just as there had been in 1924. Senator Robert LaFollette of Wisconsin had run on the “Progressive” party label in 1924 against President Calvin Coolidge and the Democratic nominee, John W. Davis. Tyson believed until farmers were given some relief, the farm states would be fertile ground for more than crops. Senator Tyson thought farm relief would remain a “sore spot” until Congress addressed the issue by placing the farming industry on a parity with other important industries. Tyson also evaluated the leading possibilities for the Democratic presidential nomination in 1928. Tyson thought William G. McAdoo, Joe Robinson, Alfred E. Smith, and James A. Reed were the most likely contenders. Robinson was the Democratic leader in the United States Senate and Tyson thought the senator from Arkansas had been a good leader. The General readily acknowledged there had been some criticism of Robinson by some who charged the Arkansan had shown a lack of leadership, an accusation Tyson dismissed. The Tennessean said he had carefully considered Robinson’s methods and decided Robinson’s style was much more effective than mere “partisan wrangling.” Tyson admitted Senator James A. Reed of Missouri had views on liquor and foreign policy that would not make Southern delegates to the national convention happy. Reed, from Kansas City, was unabashedly “wet” in his views on alcohol and had been a virulent critic of Woodrow Wilson’s League of Nations. Yet Reed was one of the most able debaters in Congress and a powerful orator. It was Senator Tyson’s opinion Jim Reed was the best orator in the Senate and noted the galleries never failed to fill with anxious people when it became known the senator from Missouri intended to speak on the Senate floor. Tyson accurately predicted the biggest question facing Democrats in the 1928 election would be that of prohibition. “The wets kept the question constantly before the Senate,” Tyson said, “and there is no denying that the wets are greatly encouraged, but I think that the great strength of the wets is in the Eastern and Northern states and if the question ever comes to a showdown before the whole people the Eighteenth amendment will be sustained.” New York governor Alfred E. Smith was the champion of the wets and a Catholic.

Republicans in the U. S. Senate stirred an investigation of how senators were elected in the South, pointing out the poll tax kept the vote low. Tennessee was one of the examples used, noting the population of the Volunteer State was 2,408,846 persons with 1,208,219 of them eligible to vote. In 1924, which was a presidential election year and normally brought out more people to vote, Lawrence D. Tyson had been elected to the United States Senate by winning 147,871 votes; his Republican opponent, Judge Hugh Lindsay, had gotten 109,859 votes, with an independent candidate winning 247 votes. Senator Kenneth D. McKellar had done even better in the non-presidential election year of 1922. McKellar had won 151,523 votes to only 71,200 for his GOP opponent. It would be decades later before Tennessee eliminated the poll tax.

During the summer of 1926, the senator’s office released the name of his nominee to the West Point military academy. Tyson was especially interested in such things being a graduate of West Point himself. Tyson’s nominee was Neil Allison Wright, the grandson of Judge W. W. Allison of Chattanooga. The boy’s mother had been the director of the women’s campaign committee during the 1924 senatorial election. The alternates selected by Tyson had all been recommended by a number of leading Tennessee citizens.

Senator L. D. Tyson’s remaining years in the Senate would demonstrate he had learned quite a bit about Tennessee politics.