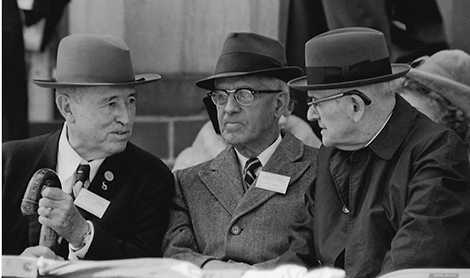 Former three-term Prentice Cooper, consigned to the political sidelines following his defeat for the Democratic nomination for the United States Senate by Albert Gore in 1958, lived in the beautiful red brick mansion built by his father in 1904.  Cooper shared his home with his wife and three young sons.  Evidently Cooper no longer missed the limelight and was content to make the occasional public comment, attend social functions, especially those that included other former Tennessee governors, and make the occasional talk.  Cooper, along with his wife, Hortense, was profoundly interested in history and preserving history, especially Tennessee history.  When Cooper first decided to run for governor, one skeptical friend thought him “mighty small to run for governor.”

The former governor was photographed at the opening of the Nashville offices of the American Association of State and Local History.  Wearing a double breasted suit and holding a cup and saucer of coffee, the former governor was snapped while chatting amiably with Dr. and Mrs. William Alderson; Dr. Alderson was the new director of the association.

One other organization Prentice Cooper remained devoted to throughout his life was the American Legion.  Having served once as state commander of the American Legion, Cooper attended the American Legion meeting in Nashville in July of 1964.  The former governor proposed a resolution for approval of the membership to condemn the National Council of Churches’ brochure on sex education.  Cooper believed the NCC pamphlet encouraged sexual promiscuity.  The gathering approved Cooper’s resolution.

With the death of Sergeant Alvin York on September 2, 1964, former governor Prentice Cooper was one of the 8,000 people who gathered for York’s funeral.  Cooper had been friends with the Medal of Honor winner for decades.  A much happier obligation befell Cooper when he was enlisted by Congressman Joe L. Evins on behalf of Lyndon Johnson’s presidential campaign.  Evins, the state campaign director, recruited Tennessee’s four living former governors to participate actively in LBJ’s election.  Gordon Browning, Prentice Cooper, Jim Nance McCord and Buford Ellington all agreed to support Johnson and Evins crowed, “These distinguished Tennesseans have been outstanding governors and have dedicated a large portion of their lives to the people of Tennessee.”  Evins told reporters, “Once again they have united to help in our campaign to elect President Johnson and our Democratic nominees because they know the Democratic party will best serve our people.”

When President Johnson visited Nashville to campaign, Prentice Cooper was sitting on the platform with Gordon Browning and Jim Nance McCord.  The Tennessean published a photograph of the three former governors showing Cooper and McCord in overcoats against the fall weather, while Gordon Browning chatted without a topcoat.  President Johnson made a point to make special mention of the presence of the former governors.  “I want to thank my old friends Governor Prentice Cooper, Governor Gordon Browning and Governor Jim McCord for honoring us with their presence,” LBJ boomed.  “They’ve all had distinguished records in this state, and they have all come over here to appear at this meeting today.”

Yet the former governor was not the only sought after speaker in the family.  Hortense Cooper, a woman of remarkable charm, was invited to make a talk on “National Defense” before the Daughters of the American Revolution in the fall of 1964.  Prentice Cooper spoke to the same group on the topic of “Peace” before traveling to Jackson, Tennessee to make the keynote speech at the meeting of the Association for the Preservation of Tennessee Antiquities gathering at the Jackson Golf and Country Club. Perhaps 125 people gathered for the former governor’s speech, which stressed the importance of preserving Pinson Mounds in Jackson as a historical site.  Cooper told Jackson residents it would be “very important” to have such a large park nearby.  The former governor recalled the “chief mound stands 73 feet high” and was “the second largest earth built mound in the country.”  Cooper seemed especially interested in acquiring an additional 350 acres for the Pinson Mounds site to develop into recreational areas for children.  “This large acreage coupled with the extreme historical value could be used for recreational trips, and camp-outs for Boy Scouts and other youth organizations,” Cooper thought.  The ex-governor was photographed in a dark suit and striped tie standing amongst four women dressed to the nines in front of a floral display.  In December Prentice Cooper was in Lebanon to speak at Cumberland University.  After Cooper’s speech, he and Mrs. Cooper attended a coffee hosted by the president of the university, Dr. Ernest Stockton.

Prentice Cooper was sixty-nine years old in 1965 and may not have much minded his loss in the 1958 Senate race, as he seemed to enjoy his retirement.  The one-time governor thoroughly enjoyed socializing with the elite members of his special club comprised of former governors.  Any past differences seemed to have been forgotten, or at the very least buried with the past.  When President Lyndon Johnson tapped former governor Buford Ellington to serve in his administration, Prentice Cooper found a kind word for his friend.  Cooper said he was delighted “Tennessee was so honored” by Ellington’s appointment.

It was in 1965 that State Representative John Bragg of Murfreesboro proposed pensions for Tennessee’s former governors.  Under Bragg’s bill, each former governor would receive a pension of $9,250 per year once past the age of sixty-five.  Only Gordon Browning, Prentice Cooper and Jim Nance McCord qualified for the proposed pension.  While Prentice Cooper said nothing, he did not need the money, but realized it would be a blessing for at least one of his peers.  Cooper maintained his silence as the bill providing pensions for former governors sailed through the state senate, although the amount of the pension had been reduced.  Eventually the bill was passed in the House and signed into law by Governor Frank Clement.

Two of Tennessee’s old political warhorses were on hand when a roadside marker was dedicated to the memory of the late Sergeant Alvin York in Jamestown: Gordon Browning and Prentice Cooper.  About 100 people gathered to honor York’s memory and watch as his granddaughter Diana pulled the cover off the plaque.  What little press had gathered for the ceremonies lightly questioned both Browning and Cooper.  Prentice Cooper offered the opinion the York Institute should be made into a junior college.  Browning made the entirely non-controversial statement that both Sergeant York and the late Secretary of State Cordell Hull were immortal in the eyes of Tennesseans.

The former governors obviously enjoyed getting together as all of them seemed to gather at every opportunity.  Prentice Cooper joined Gordon Browning and Jim Nance McCord in Dickson, Tennessee for an “Old Timers’ Celebration.”  All of the former governors could claim that particular status, although at sixty-nine, Prentice Cooper was the youngest of the lot.  Jim McCord was a vigorous eighty-six, while Gordon Browning, suffering from Parkinson’s disease, was seventy-five.  Cooper and his colleagues walked through the crowds, watching as elderly women corded cotton and churned butter.  When it came time to recognize “special guests” each of the former governors took a turn at the microphone and made a few remarks.

At the end of 1965, the ex-governors were guests of honor as Vice President Hubert Humphrey came to Nashville to make a stem-winding speech at a $25 per-plate dinner before 6,000 Tennessee Democrats.  Prentice Cooper joined Gordon Browning and Jim McCord and Buford Ellington at the speaker’s table.  Governor Cooper was in Chattanooga for a two-day conference to welcome delegates for the Citizens’ Council of America in January of 1966.

It was an election year in 1966 and both Prentice Cooper and Gordon browning accepted an invitation from Senator Ross Bass to sit on the speaker’s platform as he kicked off his reelection campaign for a full six-year term.  Bass had defeated Governor Frank Clement for the senatorial nomination in 1964 to fill the vacancy caused by the 1963 death of Senator Estes Kefauver.  Clement was once again running against Bass and it was one of Cooper’s rare appearances on behalf of another statewide candidate.

The ex-governors were seated together at a celebration for Robert King High, the five foot five redheaded mayor of Miami, Florida who was also the Democratic nominee for governor that year.  Born in Flat Creek, Tennessee, High returned to his home state and Flat Creek where 1,000 showed up to meet and greet him, including Cooper, Gordon Browning and Jim McCord.

Coming from Shelbyville, it was little wonder Prentice Cooper was on hand for the 28th annual Tennessee Walking Horse National Celebration, but it also gave Cooper the opportunity to once again visit with Gordon Browning.  Buford Ellington, again a candidate for governor, was present to watch incumbent governor Frank Clement present a huge floral horseshoe to the winner of the contest.

The contests for statewide offices inside the Democratic primary in 1966 had been especially hard fought and Governor Frank Clement had eked out a victory over Senator Ross Bass in the senatorial primary.  In the gubernatorial contest Buford Ellington only barely edged past a determined challenge by newcomer John Jay Hooker.  The former governors were needed decoration when Tennessee Democrats assembled a unity meeting for the fall campaigns.  Prentice Cooper, Jim McCord and Gordon Browning were present as Democrats attempted to heal wounds inflicted in the primary, especially as Republicans were making a strong effort on behalf of Howard Baker for the US Senate.  As it became more apparent Baker was making headway in the Senate race, Governor Clement cited the former governors as supporting him in his general election campaign.

Prentice Cooper, one of “5 living governors” was honored at a special ceremony at Tennessee Technological University in October of 1966.  Cooper, along with Frank Clement, Buford Ellington, Gordon Browning and Jim McCord were all honored by having halls or dormitories named for them on campus.  Cooper was the featured speaker for the Nashville meeting of the Sons of Confederate Veterans at the Biltmore Motel restaurant in early November of 1966.  Cooper made time to join former governors Gordon Browning and Jim McCord, along with Congressman William Anderson and Senator Albert Gore in Springfield for a rally for Governor Frank Clement as Tennesseans prepared to vote in the general election.  Cooper was quoted as saying, “We have more harmony among the leaders of the Democratic party than any time I can recall.”  As the general election loomed before the voters, Prentice Cooper said, “I am confident of a Democratic victory.  The irrepressible Gordon Browning had traveled all across Tennessee on behalf of Frank Clement, who had beaten him in an excessively bitter campaign in 1952 and again in 1954.  Browning had put aside any personal bitterness and campaigned gamely for Clement.  Both Cooper and Jim McCord made speeches in a few counties on behalf Democratic candidates and both were likely surprised when Howard Baker defeated Frank Clement.

Governor Prentice Cooper appeared to be slowing down, although he managed to keep up with his schedule of appearances, especially where it concerned historic preservation.  The slight former governor was photographed by the Tennessean in May of 1967 and the seventy-one year old Cooper’s hair had gone white. Prentice Cooper looked somewhat thin and frail, likely because he had been diagnosed with intestinal cancer in 1965.  For the last four years of his life, the former governor endured repeated surgeries to remove the cancer and each time was assured he had been “cured.”  Unfortunately, it was not so and Prentice Cooper entered the Mayo Clinic for the final time in 1969, lingering there for eight days before dying on May 18.

The Tennessean, usually a critic of Prentice Cooper politically, summed up the diminutive former governor, saying he “made up in fight what he lacked in size.”  Cooper had fought a valiant and long battle with cancer before death could take him.