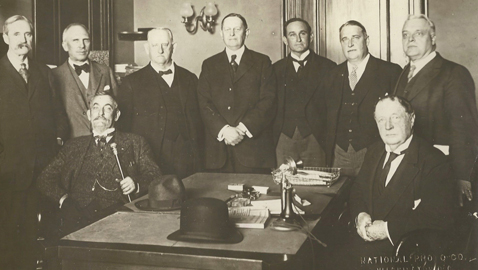 By Ray Hill
to 1915, United States senators from Tennessee had been elected by the state legislature.  That same year Democrats were anticipating a primary, a year in advance of the 1916 general election.  The primary would include a run-off election between the two top vote getters, something that has never happened since.

The incumbent senator was Luke Lea, young, handsome, flamboyant and powerful due to his ownership of the Nashville Tennessean.  Lea was also a highly controversial figure for many Tennessee Democrats as he, like his colleague from Tennessee, John Knight Shields, had been elected by a combination of Independent Democrats and Republicans called “fusionists.”  The fusionists also had helped to elect Republican Ben W. Hooper governor of Tennessee.  Naturally, “regular” Democrats wanted to oust Lea after having defeated Hooper in 1914.  The Democratic State Executive Committee had agreed to hold the primary a year in advance to help diminish Senator Lea’s chances of survival.

There were numerous prospective candidates for the senatorial nomination, including several members of Tennessee’s congressional delegation.  Congressman Cordell Hull considered running for the Senate, but finally decided to back another candidate.

Congressman Kenneth D. McKellar of Memphis was gathering considerable support in East Tennessee, a primarily Republican region, but was also expected to run strong in heavily Democratic West Tennessee.  The persistence of former governor Malcolm Rice Patterson to make a comeback was thought by many to bolster Luke Lea’s bid for a second term.  Patterson was also from Shelby County, which was thought likely to diminish McKellar’s vote-getting ability at home.  Yet there was another West Tennessean eager to run for the Democratic senatorial nomination: Congressman Thetus Willrette Sims.

Sims represented a rural, largely agricultural district and had been in Congress twenty years.  A large, heavy-set man with a moustache, Thetus W. Sims likely believed himself to be an ideal candidate due to his long years in Congress.  By comparison, K. D. McKellar had only served in Congress for four years, having been elected in a 1911 special election following the death of incumbent George Washington Gordon.  Patterson had served in Congress and as governor for four years, but his time as Tennessee’s chief executive was turbulent and he was as polarizing a figure as Luke Lea.  Sims made it known he was thinking about entering the senatorial primary.  At sixty-three, Sims was also the oldest of the potential candidates for the Democratic nomination.

Congressman Thetus W. Sims made his entry into the senatorial race on July 26, 1915, issuing a statement from Washington, D.C.  In his announcement he would be a candidate, Sims readily acknowledged Tennesseans customarily gave senators and congressmen a second term, but felt Luke Lea’s record in the United States Senate was poor.  Sims also condemned Lea’s original election by “a fusion of democrats and republicans without any party nomination or indorsement [sic] of any kind.”

Sims pointed out Lea had defeated the regular Democratic nominee, former governor Benton McMillin, to get to the U. S. Senate.  Congressman Sims also readily admitted Luke Lea had many admirable characteristics, saying the senator was “possessed of untiring energy, of exceptional ability and of much personal magnetism” and had the benefit of having “all the advantages of education and environment that wealth and affluence could give him…”  Sims said he would make no comment on Lea’s seeming inability not to interfere in just about every aspect of politics in Tennessee, but hit the incumbent over absenteeism.

While senators “much older and less vigorous and strong than our senior senator were standing like Spartans through long, weary days and nights, without sleep, food or drink” Tennessee’s “young, vigorous, athletic, Sampson-like senator was nowhere to be found.”  Congressman Sims did hint at Lea’s constant interference in local politics, noting, “The people can certainly be trusted to look after city, county, and state politics properly without the managerial aid and assistance of a United States senator, and especially at a time when he must leave his post of duty in order to give such aid and assistance.”  Sims accused Lea of being “a political despot” who “if he had the power, would not permit any man to hold any state or federal office who was personally or politically offensive to him.”

Congressman Sims’ lengthy statement brought a prompt reply from Senator Luke Lea in his Tennessean.  Lea was not nearly so delicate in answering Sims, noting the congressman’s statement had been released from Washington “where Congressman Sims resides.”  Lea described the statement as “interesting” and said “If I am to be succeeded in the senate by a non-resident of the state, I would for personal reasons rather be succeeded by Congressman Sims than by any one I know.”  Senator Lea claimed “our relations were most intimate and cordial until the senatorial bee began to buzz around the ‘Judge’s’ sylph-like form last January.”  Lea said since he had first come to the Senate in 1911 it had been “my privilege to enjoy two or three hours” of Sims’s “company each day I was in Washington.”  Lea also pointed out Sims had been “fulsome” in his praise of “my course in the senate and out of it” and the senator had routinely aided the Congressman’s reelection efforts.  Lea readily confessed he had used “whatever influence” he could muster “to enable two splendid members of” the congressman’s family to obtain “two of the most important and lucrative offices of the government of the District of Columbia.”  Lea was quick to add the members of Sims’s family did not live in Tennessee, but in Washington, D. C.  Lea excused his frequent absences from the Capitol due to the fact his own family continued to live in Tennessee, compelling him to return home more than he might have liked to be away from Washington.  Lea charged Thetus Sims lived in Washington and only returned to Tennessee to campaign for reelection every other year.  “If the democrats of Tennessee desire to be represented in the upper house of congress by a resident of Washington, who will be there all the time, whether congress is in session or not – – – out of touch and sympathy with his people, ignored of their needs, unmindful of their wants – – – they could make no happier selection out of all that distinguished company of Tennesseans residing in our beautiful capital than Thetus Willrette Sims, who some twenty years ago resided at Linden, in the state of Tennessee.”  Senator Lea concluded his reply to Congressman Sims by saying, “…my hat is also in the ring and I am prepared to defend it against residents and non-residents alike.”

Owning a widely read newspaper, which covered much of Middle Tennessee, gave Luke Lea certain advantages; an advantage he used shrewdly to pummel his political opponents.  Days after the exchange with Congressman Thetus W. Sims, Luke Lea published reaction to Sims’ statement from smaller newspapers across the state.  Not surprisingly, most of the commentary Lea chose to publish was not friendly to the portly congressman.  The Columbia Herald dismissed Sims’ stated reasons for running for the Senate and sniffed, “If the Honorable Thetus W. Sims, twenty years a member of congress and now a candidate for the senate, can find time between his races for public office he should write a political history of the state and nation.”  The Rockwood Times chortled Sims’ announcement “didn’t create a ripple” in Tennessee’s political pool.  The Times found the congressman’s announcement to be a “disappointment and weak in all its elements.”  The Tullahoma Guardian noted Congressman Sims “fails to state any good and sufficient reason why he should ever be Mr. Lea’s successor.”  The Guardian barked, “Never mind about the other fellow’s demerits; tell the people of your own merits.”  The Lewis County Herald disapproved of the Congressman’s attack on Senator Lea and concluded, Sims’ announcement “shows him to be to be of smaller caliber than we had thought him to be.”

A trio of Tennessee congressmen – – – Kenneth D. McKellar, Finis Garrett and Cordell Hull, referred to as “the Triumvirate” by Luke Lea’s Tennessean – – – ignored the candidacy of Thetus W. Sims.  The Tennessean reported the three men formed an “ambitious Triumvirate that will work in harmony until the time comes when inevitably one must play the role of Pompey, one the role of Julius Caesar and the other the role of Crassus.”

While the three Tennessee congressmen considered which of them would challenge Senator Luke Lea, Thetus W. Sims opened his bid for the Democratic senatorial nomination in Chattanooga.  The Tennessean gleefully reported the audience was comprised of only some 116 people, “a third of whom were republicans.”  It was not an impressive opening for a statewide campaign and days later Congressman Sims was roaring he had been “double-crossed.”  Sims was reacting to the refusal of his colleagues, Kenneth McKellar, Cordell Hull, and Finis Garrett, to support his campaign.

As it appeared certain McKellar would become a candidate for the U. S. Senate, Sims bellowed a warning: “I shall be compelled to regard any attempt to bring out any other candidate by those who are opposing Senator Lea as a ‘deliberately unfriendly’ act.”

The “unfriendly act” was not long in coming.  As Congressman Sims settled into Nashville’s Tulane Hotel, a favorite for politicians seeking statewide office, K. D. McKellar was on his way to Nashville to open his own headquarters for seeking the Democratic nomination for the United States Senate.  Sims was soon complaining he had been “shunted” aside in favor of McKellar, who appeared to be a much stronger candidate against Luke Lea.  Lea’s Tennessean admitted McKellar had gotten into the race as easily as Sims, but “is going to be hard to get out” of the primary campaign.

After making speeches in Maury County and Trenton, Congressman Thetus W. Sims bowed to the inevitable.  It became increasingly clear Sims did not have either the resources or support to continue a statewide campaign and he was loath to risk losing his seat in Congress.

Sims withdrew as a candidate for the United States Senate on September 4, 1915.  Sims offered a rather lame excuse that he would never have become a candidate had he known the primary would be called for November of that year.  Sims said an early primary made it impossible for him to make a thorough canvass of the state.  Sims thanked those who had supported him and backed into a reelection race and faced an opponent who had declared when it appeared the congressman was running for the Senate.

Sims was hard pressed to win renomination to his seat in the House of Representatives.  The congressman was reelected in 1916 and 1918, but faced Gordon Browning, a young veteran of World War I in the Democratic primary in 1920.  Overconfident, Sims only came home to campaign when he realized too late Browning was a threat to his continued tenure in Congress.  Browning trampled Sims in the primary election, winning 6,900 votes to only 3,334 for the incumbent.

D. McKellar had beaten both Senator Luke Lea and former governor Malcolm Patterson for the Democratic nomination for the United States Senate. McKellar dispatched for governor Ben W. Hooper, the GOP nominee, in the 1916 general election. Thetus Sims seemed to harbor some resentment of McKellar’s success and declared himself a candidate against McKellar for the 1922 Democratic nomination for the U. S. Senate.  Once again Sims made an inept start to his campaign and withdrew well before the primary election.

Returning to his law practice, Thetus W. Sims retired in 1930 and moved to Washington, D. C. to live out his remaining years.  Despite his ambitions, Thetus W. Sims was the senator that never was.