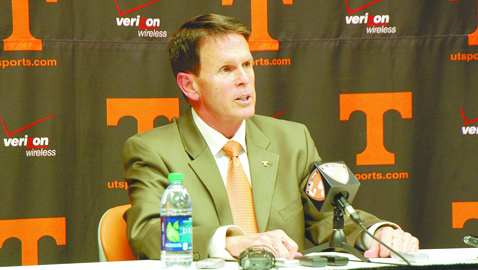 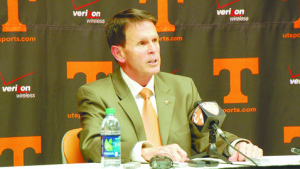 By Alex Norman
Last Sunday morning “The Derek Dooley Show” aired in its normal time slot, just as news was breaking that Dooley was fired as Tennessee’s head coach.
Which gave us the absurdity of seeing Dooley talk about the loss to Vanderbilt… all while a “crawl” appeared at the bottom of the screen… stating that Dooley had been dismissed.
Thinking about it… is that the most Derek Dooley thing ever?
But that’s really difficult thing to pinpoint.  The past 34 months have had one ridiculous incident after another.
From losing a game because Tennessee had 13 players on the field (LSU, 2010) to losing a game even though UT’s opponent had approximately 23 players on the field (North Carolina, 2010 Music City Bowl) to giving up a school record 721 yards of offense to Troy back in November, the hits just kept on coming.
As Bill Parcells once famously said, “You are what your record says you are.”  Derek Dooley, who was 17-20 in three seasons at Louisiana Tech, finishes his Tennessee career at 15-21 in just under three seasons, with a 4-19 mark in SEC play.
Tennessee hadn’t had two consecutive losing seasons in a century before Dooley came to Knoxville. Now, they are sitting on three of those in a row.
Dooley’s quirky nature appealed to many Tennessee fans, especially after the slick, used car salesman Lane Kiffin left town.  Comparing Tennessee’s defense to German defense forces on D-Day was just one example of his humor.  “Where’s Rommel?” became a punch line…
And Tennessee football became a laughing stock.
With each passing day, the decision to fire Phillip Fulmer, hire Lane Kiffin and then hire Derek Dooley looks worse and worse.  Even in Fulmer’s last season, the Vols still won 3 SEC games…
During this span, the list of coaches the Vols could have reportedly hired include Brian Kelly (now at Notre Dame), and Kevin Sumlin (now at Texas A&M). Would they have had similar success in Knoxville?  We’ll never know. But it’s hard to imagine things would be worse.
Dooley didn’t walk into the best opportunity. Everyone knows that. But the missteps he made proved that he wasn’t ready for this job, and under normal circumstances never would have gotten it.
The surprise departure of Kiffin left former Tennessee athletic director Mike Hamilton unprepared. The Vols panicked and hired Dooley after being turned down by coaches like Will Muschamp, Kyle Whittingham and David Cutcliffe.  The absurd buyout clause inserted in Dooley’s deal (he’ll be paid $5 million more NOT to coach the Vols) shows their desperation at that time.
What they got was a coach that talked about discipline and doing things the right way, but still was willing to bend rules to give players like Bryce Brown, Janzen Jackson and Da’Rick Rogers extra chances to shape up.  And of course there’s Tyler Bray, a player with a million dollar arm and a 10 cent head.  He taunted opponents, threw beer bottles at cars and was ticketed for operating a jet ski recklessly.  His punishment?  Yeah, it was handled internally.
Dooley also made a hire that rivals the 2008 selection of Dave Clawson as Fulmer’s offensive coordinator in terms of ineffectiveness.
Sal Sunseri was named Tennessee’s defensive coordinator during the off-season and the results have been historically… well, horrific.
I could keep on rattling off these details, but I got to thinking… is there one point that it all went wrong?  Where Dooley lost the fan base and his players in addition to all those football games?
I found that moment to be last November, when Tennessee lost 10-7 at Kentucky.  That snapped a 26 game winning streak enjoyed by the Vols over the Wildcats.  UK had a wide receiver playing quarterback.  The loss kept Tennessee from playing in a bowl game.
Reports of a division in the locker room leaked out… with players like Bray and Rogers reportedly saying to teammates that they didn’t want to play in a lower-tier bowl game.
Following the loss, assistant coaches began fleeing in droves, the biggest blows coming when defensive coordinator Justin Wilcox and linebackers coach Peter Sirmon left Knoxville to take the same jobs at the University of Washington.  Seven out of nine assistant coaches left Dooley’s staff after the 2011 season.
In addition, receiver DeAnthony Arnett asked for a release from Tennessee to be closer to his ailing father in the state of Michigan. Dooley refused.  He later changed his mind under pressure, but the public relations damage was getting severe.
So, during this time of great angst in Vol Nation, with another losing season punctuated by the most embarrassing loss in decades… with assistant coaches leaving and player unrest… with the recruiting class of 2012 still not secure and National Signing Day not coming up until February… what was Dooley doing to calm the nerves of Big Orange Country?
Who knows!  Dooley didn’t speak to the media one time in 37 days following the loss to Kentucky.
37 days!  He was making $2 million a year and couldn’t take 15 minutes to hold a press conference or take calls from fans or heck, even tweet a message to Vols supporters (Dooley’s social media imprint is non-existent).
When the going gets tough in athletics, players and fans look to their leaders.
Derek Dooley chose to bury his head in the sand at the time when he was perhaps needed the most.
Yes, Tennessee football is better off today than it was three years ago following Kiffin’s midnight run.
And Tennessee football is better off today because Derek Dooley’s tenure in Knoxville is complete.