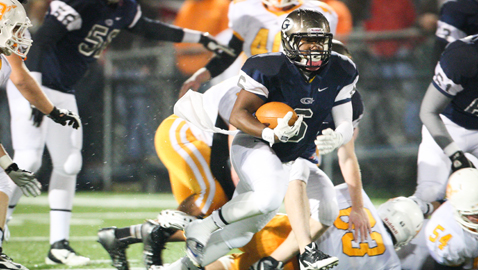 Photo by Kara McKamey.
Kyron Inman carries the football for Grace Christian Academy in its 47-27 playoff win Friday night over Oneida. Inman was the Rams’ top ground gainer in the second-round victory.

“I thought we did a great job and never were in jeopardy, but at times we played a little sloppy on both sides of the ball,” said McKamey after the Rams eliminated visiting Oneida 47-27 in a TSSAA Class 2A second-round game at the Jerry Disney Sports Complex.

“All correctable mistakes, but I find myself saying that a lot lately. When we played Rockwood (in the regular season finale Nov. 1) we did a few silly things and I said it was all correctable, and we didn’t make those corrections this week. As we get deeper in the playoffs against some really, really good football teams, that’s going to hurt us.”

The Rams (11-0) seemed to lose a little intensity after mounting a 34-0 lead with 4:41 remaining in the second quarter.

“They sure did, absolutely, and it was not a pretty halftime sight in the locker room,” added McKamey. “It was very frustrating. We’d given up a kickoff return and then a big bomb at the end of the first half. We just felt like they got complacent.”

Grace has become a state power in recent years but still lacks a gold football, the symbol of a state championship. McKamey, obviously, doesn’t want to see his team waste a golden opportunity this season. Thus, his concern about errors not getting corrected.

This Friday night, GCA will again play in the quarterfinal round, hosting Silverdale Baptist Academy out of Chattanooga at 7 p.m. The Seahawks (11-1) won at Hampton 28-21 in the second round.

“We talked about weathering the storm,” said Oneida Coach Tony Lambert, whose team hung up a 9-3 record. “Grace has a fantastic team. We knew they would play really fast early on and there would be a barrage of points probably. My players responded to the challenge and never gave up.”

Geoffrey McReynolds ran in from the 5 and 1-yard line for two touchdowns and quarterback Devin Smith hooked up with Andy Eddins on TD passes of 8 and 9 yards to lead the Grace scoring.

Kyron Inman and Nathan Silver gave the Rams a 14-0 lead in the first quarter with touchdown runs of 20 and 35 yards, respectively. Cameron Kuerschen added Grace’s final TD on a 6-yard run in the fourth quarter. Skylar Sexton kicked five PATs.

Already leading 28-0, a 22-yard fumble return by Inman set up the fifth Grace touchdown and the Rams looked to be headed for a mercy-rule size lead, but Oneida didn’t quit. Nate Bowling returned a kickoff 90 yards for a touchdown and caught a 31-yard scoring pass from Cole West with just 17.2 seconds left in the first half to cut GCA’s lead to 34-14.

Jake Lawson had a 1-yard run and Cole West threw an 18-yard pass to Cage West for the Indians’ final two scores. A 41-yard catch by Cage West had set up Lawson’s TD.

Grace started the game by pounding the rock, marching 80 yards in seven plays out of its Wing-T formation.

Smith showed his arm strength on the first play of the second quarter when he passed 55 yards to a diving Inman for a first-and-goal at the 3.

Smith went on to complete 12 of 19 passes for 167 yards. Eddins had four catches for 43 yards. Smith connected with six different receivers.

Smith, senior captain, said he would probably give the Rams’ offensive performance a “B minus or C plus. The scoreboard says we won by 20 points, but we know we can do better.”