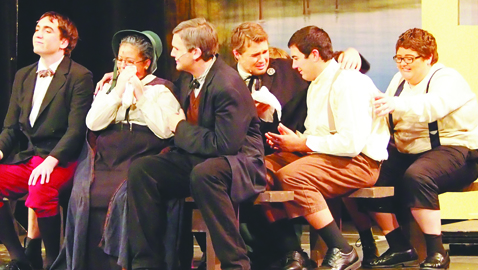 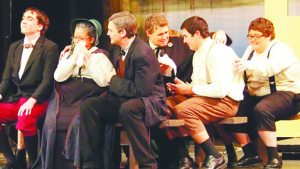 Jacob Weaver as Sidney Sawyer, Courtney Frederick as Aunt Polly, Blake Huff as Judge Thatcher (front bench) and members of the Seymour High School Chorus act out the funeral scene in which Tom Sawyer attends his own funeral.

The SHS Choral Department recently presented “Tom Sawyer, the Musical” and didn’t fail to entertain and delight audience members. Faithful members of the community, family, and friends came to support the choral students who had worked for months in preparation for Seymour High School’s 15th annual musical. Also in attendance on opening night were Senator Doug Overbey and State Representative Richard Montgomery who both praised the hard work exhibited by all the students. Even though the musical has ended its run, the compliments continue to pour in though cards, letters, and e-mails. One audience member who had no child in the program but had heard the SHS Choral programs were well done attended on Saturday night. After seeing the production, he stated that the SHS production was “as good as any professional production” that he had seen.

Mrs. Burkhart implemented the idea of partnering with a local organization several years ago in an effort to provide her students an opportunity to give back to the community that consistently supports them. In addition, she feels that it is important to not only focus on achievement but also on being significant.

Stated Mrs. Burkhart: “The children who attended the matinee don’t really care that we’ve been State Champions twice or that we are nationally recognized. They just know that we were kind to them and wanted them to have a good time. There is the old saying that people don’t care what you know until they know how much you care. That’s basically the lesson I want my students to learn. I want them to be brilliant at what they do and care about others in the process as they strive towards excellence. I know this year’s choir has learned that lesson well. It has been evident in everything that they have accomplished and in the people that they have touched along the way.”