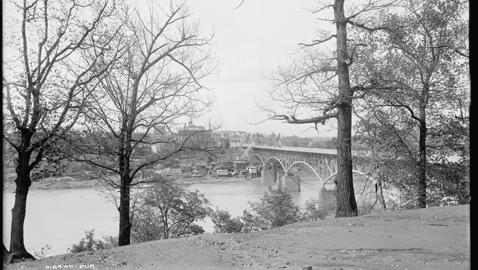 As part of our continuing series focusing on “Our Neighborhoods” we begin looking at South Knoxville. That portion of the Knox County communities will include several upcoming issues as we move to highlight the important part of our county. In future weeks The Focus will come back to South Knox and journey further down Chapman Highway and into other neighborhoods.

At first it would seem that South Knoxville has been plauged with troubles in recent years. The Henley Street Bridge was closed for repairs, the Baptist Hospital abandoned and now much of it to be demolished, and the entire community disrupted by having to find other ways in and  out of downtown.

But the bridge is now partially open, the old hospital has been sold, the south waterfront is being developed, and the businesses along Chapman Highway are recovering. Most Knoxville residents know that going to South Knoxville to shop, eat, or get to the Smoky Mountains is convenient.

South Knoxville’s history began with an early settlement of our region but it wasn’t connected to Knoxville proper by a bridge until after the Civil War. In fact, the Union built a pontoon bridge across the river and then a stone bridge was later built by General Ambrose Burnside during Union occupation. The county built a covered bridge that was destroyed by a tornado and then G. W. Saulpaw built a wooden bridge that lasted until the city built the Gay Street Bridge in 1898.

South Knoxville remained agricultural for many years. Marble was discovered and mined at what is now Ijams Nature Center and at the Candoro Marble Works in Vestal. The opening of the Great Smoky Mountains National Park and the completion of the Henley Street Bridge in 1931 further boosted the growth of South Knoxville.

There are many, many national and regional celebrities from South Knoxville, including the late Doris Sams, noted women’s baseball player who inspired the move “A League of Their Own.” She passed away in 2012 at age 85 and was a member of the Vestal United Methodist Church.

Chapman Highway really began with the construction of the Henley Bridge. For many years, the highway was the preferred route to the Great Smoky Mountains. Motels, supermarkets, retail shops and restaurants were built along the highway as South Knoxville grew. Today, any national-chain restaurant you can imagine exist along the highway, with probably the best-known, locally owned restaurant being Ye Olde Steak House.

Along with this commercial development, several subdivisions and neighborhood developed. The earliest of these was Lindbergh Forest, which opened in the 1920s.

The 2011 closing of Henley Bridge injured several Chapman Highway businesses and detoured shoppers and employees around the northern portion of the highway. With two lanes of the four lane bridge now open, the businesses may be recovering their losses.

Allen Miller, owner of The Disc Exchange on Chapman Highway, told The Focus that business is beginning to improve with the partial reopening of the bridge and, until then, it was dropping off every month. He said that there are still some detour signs along the Interstate that direct traffic away from Chapman and that the Chapman-Moody intersection is still blocked to one lane going north. He said he’s worked with the city and county to try to get the state to remove the signs and open Chapman and has talked with State Senator Duncan Massey about the situation. The completion date for the bridge’s renovation is slated for June of this year.

“There will be a flurry of activity the next two years,” promises City Councilman Nick Pavlis, who represents the area. He said the closing of the Henley Bridge was a “disaster for businesses” but added “They organized themselves” as a result.

Pavlis pointed out many positives and the potential of his District. He cited the Urban Wilderness, bike and trail system, and the renovation of the old Baptist Hospital as contributing to South Knoxville both during construction and afterward. Pavlis said his idea to get a Historic Zoning for the former Kern’s Bakery Building on Chapman will soon be back before city council. His plan will affect only the outside of the building and he hopes to see mixed residential or retail business there. He also points to the relocation of the entry to Fort Dickerson and other improvements there like rest room facilities and a pavilion as helping the area.

Fort Dickerson is but one of many parks in South Knoxville. There’s also the new High Grounds Park, Duff Field, Mary James and Maynard Glen Park, Ijams Nature Center, Island Home Park, South Knoxville Optimist Park and Mary Vestal Park. Pavlis said there are plans to improve the Vestal Park and “I want all the parks to be touched.”

“I’ve never been more excited. There’s a lot of work to be done,” he added.

Patrick Michael of Wood Realtors said that he’s seen a lot of interest in young professionals about living in South Knoxville because of the urban wilderness and the idea of riding their bikes into downtown. Michael lives on Island Home Avenue and serves on the Candoro festival committee.

The community we now know as Vestal was once a small, incorporated city known as “South Knoxville.” Like the Island Home neighborhood, the little town didn’t begin to grow until the bridges were built.

The community takes its name from the Vestal Lumber and Manufacturing Company, founded by the Vestal family. The company centered around Maryville Pike and Ogle Avenue, where other businesses located to form a downtown area. The lumber company employed hundreds of people and was, at one time, one of the largest in the South, closing in 1962.

Mary Vestal Park, along Goose Creek, is named for the mother of the founding brothers. Today it has a Community Center with a weight room, gym, basketball, indoor pool, playgrounds, tennis courts, ball fields, and meeting rooms.

Fine marble is located in our region and in 1914 John J. Craig III founded the Candoro Marble Company. Today the company showroom is listed on the National Register of Historic Places and was designed by prominent Knoxville architect Charles Barber.

Some of America’s finest monuments have marble from the Candoro works. The site is the location of events during the year.

In October of last year the Aslan Foundation and the South Knoxville Alliance, along with the City of Knoxville, sponsored a “Visioning Workshop” for Vestal to find short term, low cost improvements for the community destinations like the Mary Vestal Park. The South Knoxville alliance meets tonight, at 6:30 at the Labor Exchange building next to the Disc Exchange. It’s made up of businesses in the 37920 zip code and aims to “strengthen our unique district by sharing our hidden treasures” through marketing, events, and festivals.

Newman Seay, acting President of the Vestal Community Organization, said they are planning improvements to Mary Vestal Park through a matching grant from the city, when weather permits. He said the group will match the grant through donations and labor on landscaping and brush removal. “The Roger’s Group will donate material for a sidewalk,” he said, adding that the walking trail along the creek will be improved and extended.

The Vestal group meets the second Monday of every month at the South Knoxville Community Center, which most local people simply refer to as the “Boys & Girls Club” but have not met recently because of weather. He said they notify members and Vestal residents through a newsletter they publish. He also said the group is a member of the South Knoxville Neighborhood Advisory Board.

One of the annual highlights in the Vestal community is the South Knoxville Arts and Heritage Festival, locally known as “Vestival” and the celebration is scheduled for May 10 this year. Trudy Monaco is a founder of the festival, which started in 2001, and is already working on plans for this year’s event.

“We hope to have a little Opera with the Marble City Opera. There are two stages and there’s a kickoff the evening before the event,” Monaco said. She told The Focus the festival is “eclectic” and may also feature the rock band The Vestal Riders and the Knoxville Persian Music Ensemble. In addition to the two stages, the carriage house at the Candoro site usually features “mountain” music performances and jam sessions.

Inside the historic Candoro building itself will be an Art exhibit, with this year’s focus on quilts.

The idea of the “Vestival” is to remind people of their heritage and one tent will feature local and regional history.

“It’s so important when people in a community know their story, it gives them pride,” she said. Monaco asked that anyone, especially older local people, get in touch with her and take part.

You can get more information about Vestal and the festival on the internet at candoromarble.org.

“My husband Gene and I love living in South Knoxville, because it’s truly a special place,” Knoxville Mayor Madeline Rogero told The Focus. “It’s got great neighborhoods with lots of tree canopy and strong neighborhood organizations. The scenic beauty is remarkable.”

“The recreational assets are outstanding, and they’re getting continually better. Our growing Urban Wilderness has achieved national recognition as an outdoor recreation destination, and it’s a key economic development asset – not just for our city, but for the region and state,” Mayor Rogero said.

The Mayor added that there will be a lot of excitement in South Knoxville in 2014 due to carefully planned City projects starting to take shape – with “a lot of dirt being moved,” as she puts it. For example, the City’s new Suttree Landing Park and Waterfront Drive will be underway on Knoxville’s South Waterfront, and a redesigned entrance to Fort Dickerson Park on Chapman Highway will be built that will enhance functionality, safety and aesthetics.

But the biggest dirt moving of all will be the long-term redevelopment of the former Baptist Hospital site by private developers.  Blanchard & Calhoun Commercial Corp. is proposing to roll out a mix of luxury apartments, student apartments, a hotel and retail and office space – an investment of some $165 million along the South Waterfront, according to Rogero.

“It will be exciting to watch as the transformation of the waterfront unfolds,” Mayor Rogero says.

“South Knoxville is an important part of the Knox County economy, and I’m happy to see increased traffic at businesses along Chapman Highway now that the Henley Street bridge is partially reopened.  During the closure, I and my staff focused on organizing cash mobs to raise awareness and increase traffic to businesses affected by the bridge closure.  We even put together a successful two-day festival, SouthFest, which focused entirely on drawing families from across Knox County to South Knoxville,” he said.

“These efforts helped keep traffic moving through South Knoxville during the past few years.  Since then, we’ve continued to focus on supporting locally-owned companies by targeting businesses and restaurants countywide, not just south of the river.  If Knox County residents make a point to support locally-owned businesses, we all benefit, no matter where you live or work.  Small businesses have always been, and continue to be, the backbone of our economy, and it’s important that we all continue to support them any time we can,” Mayor Burchett concluded.