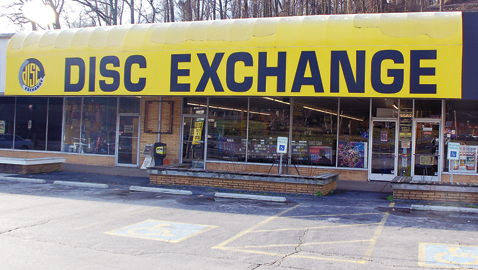 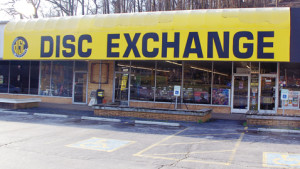 Photo by Dan Andrews. The Disc Exchange is located at 2615 Chapman Highway.

10 Years, a nationally known band with local roots, will return to Knoxville for a performance at South Knoxville’s Disc Exchange. The band will celebrate the release of their 4th album entitled “Minus the Machine.” The album title pays tribute to their recent decision to split with a major record label.

Splitting up with a major label after five years was “a very scary step to take,” lead vocalist Jesse Hasek admits. “It’s like breaking up with a longtime girlfriend. You’re used to the motions, but when it becomes stale and unhappy, you need to move on and get energy back into your life. There was no anger on either side. We just painlessly parted ways.”

According to the band’s website, working together as a band for the first time since writing the Gold-selling album “The Autumn Effect” helped 10 Years go back to their roots, without label-enforced pressure to create a radio-friendly “hit,” and free to experiment with the hard rock sounds that lie at the core of their music.

“Our true fans who buy the albums, not just the singles, understand that our singles, for the most part, misrepresent the entire album,” says Hasek. “As a band, we like to explore more and go a little left of center with song structures. We wanted to create an album that has no boundaries, and where we didn’t have to make every song ‘three minutes and 30 seconds’ for a label to approve it. There’s a fine line with that, of course, and we’re very aware of it. We all grew up on rock music, and as many albums as we’ve written, the way we’ve written them, it’s ingrained in us to work within a time frame that fits radio. There are definitely songs that work well for that, but as a whole, we wanted this album to represent a journey in a sense.”

In addition to Hasek, the band features Brian Vodinh on guitar and drums, Ryan “Tate” Jonson on guitar, and Lewis Cosby on bass.

“When you feel like you’re being told to go through motions and jump through hoops, it takes the heart out of it,” Hasek said of the band‘s fresh approach to their music. “We know that we need a hit and we understand that it’s important. However, as musicians, we’re not a band that says, ‘We’re going to make a hit.’ It’s better to do what comes naturally and then figure out the after-effect.”

While the well-known band has over a quarter million Facebook fans and a YouTube performance with over 40,000 views, they are committed to staying connected to their fans and look forward to returning to their roots here in Knoxville for their upcoming album release, on August 4th, at 3:00 p.m. The band will hold a “Meet & Greet” session following the performance.  Free beer will be provided by Eagle Distributing and free pizza will be provided by I Love NY Pizza. 10 Years stickers will be available with purchase of the album.