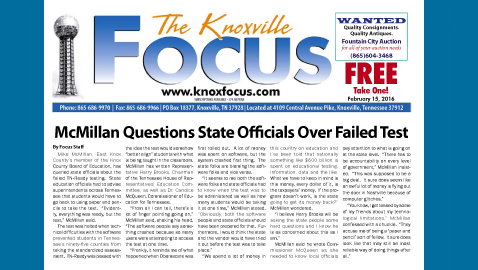 Mike McMillan, East Knox County’s member of the Knox County Board of Education, has queried state officials about the failed TN-Ready testing.  State education officials had to advise superintendents across Tennessee that students would have to go back to using paper and pencils to take the test.  “Evidently, everything was ready, but the test,” McMillan said.

The test was halted when technical difficulties with the software prevented students in Tennessee’s ninety-five counties from taking the standardized assessment.  TN-Ready was passed with the idea the test would somehow “better align” students with what is being taught in the classroom.  McMillan has written Representative Harry Brooks, Chairman of the Tennessee House of Representatives’ Education Committee, as well as Dr. Candice McQueen, Commissioner of Education for Tennessee.

“From all I can tell, there’s a lot of finger pointing going on,” McMillan said, shaking his head.  “The software people say something crashed because so many users were attempting to access the test at one time.

“Frankly, it reminds me of what happened when Obamacare was first rolled out.  A lot of money was spent on software, but the system crashed first thing.  The state folks are blaming the software folks and vice versa.

“It seems to me both the software folks and state officials had to know when the test was to be administered as well as how many students would be taking it at one time,” McMillan stated.  “Obviously, both the software people and state officials should have been prepared for that.  Furthermore, I would think the state and the vendor would have tried it out before the test was to take place.”

“We spend a lot of money in this country on education and I’ve been told that nationally something like $600 billion is spent on educational testing, information, data and the like.  What we have to keep in mind is this money, every dollar of it, is the taxpayers’ money.  If the program doesn’t work, is the state going to get its money back?” McMillan wondered.

“I believe Harry Brooks will be asking the state people some hard questions and I know he is as concerned about this as I am.”

McMillan said he wrote Commissioner McQueen as she needed to know local officials pay attention to what is going on at the state level.  “There has to be accountability on every level of government,” McMillan insisted.  “This was supposed to be a big deal.  It sure does seem like an awful lot of money is flying out the door in Nashville because of computer glitches.”

“You know, I get teased by some of my friends about my technological limitations,” McMillan confessed with a chuckle.  “They accuse me of being a ‘paper and pencil’ sort of fellow.  It sure does look like that may still be most reliable way of doing things after all.”