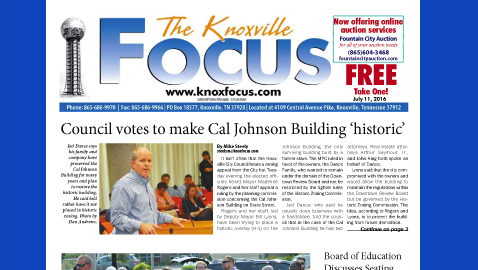 It isn’t often that the Knoxville City Council hears a zoning appeal from the City but Tuesday evening the elected officials heard Mayor Madeline Rogero and her staff appeal a ruling by the planning commission concerning the Cal Johnson Building on State Street.

Rogero and her staff, led by Deputy Mayor Bill Lyons, have been trying to place a historic overlay (H-1) on the Johnson Building, the only surviving building built by a former slave. The MPC ruled in favor of the owners, the Dance Family, who wanted to remain under the domain of the Downtown Review Board and not be restricted by the tighter rules of the Historic Zoning Commission.

Jed Dance, who said he usually does business with a handshake, told the council that in the case of the Cal Johnson Building he has two attorneys. Real estate attorneys Arthur Seymour, Jr., and John King both spoke on behalf of Dance.

Lyons said that the city compromised with the owners and would allow the building to maintain the regulations within the Downtown Review Board but be governed by the Historic Zoning Commission. The idea, according to Rogero and Lyons, is to protect the building from future demolition.

Dance said the family now has plans to restore the building and rent it or use it as part of their Summit Hill business, Bacon & Company, a firm that manufacturers corporate and team sports apparel and has merged with Athletic House. Bacon & Company faces Summit Hill and the Cal Johnson Building is immediately behind the company.

David Dewhirst, developer, and Bob Booker, community leader and historian, spoke in favor of the H-1 zoning with Dewhirst telling how the historic overlay category has helped him in restoring historic buildings, including the Kerns Bakery, with tax credits and other benefits.

“The process shouldn’t be feared,” he said.

Dance reminded the council that twice the city and county attempted to have the building demolished, adding, “We’re going to fix it up, we’ve got money set aside.”

Seymour said the Dance family has preserved the building for the past 40 years and has no plans to tear it down. King said that plans have been drawn up to renovate it and architectural plans submitted. He indicated that an H-1 zoning would fall under the regulations established by the U.S. Secretary of Interior and those regulations are too extensive.

Lyons reminded the council that the city has agreed for the building to remain under the Downtown Review regulations but would be administered by the Historic Zoning group.

Councilman Daniel Brown said he supports the city’s appeal and Councilman Nick Della Volpe questioned if the change would place a burden on the property owner and said he didn’t understand the urgency of the request.

“The only extra burden is if someone wanted to demolish the building,” Mayor Rogero said, stating that a request for demolition could be made by any future owner.

Councilman George Wallace said he opposed the change and that the current owners are opposed to the rezoning and are willing and able to protect the property. He called the city’s request for the historic zoning “heavy handed.”

Councilman Duane Grieve said he didn’t see the H-1 zoning as a burden.

“We have to look beyond; this is the history of our black community. The H-1 is really for protection, not a detriment,” Grieve said.

Palmer said she believed the Dance family is “well intended but things happen if you don’t have the H-1 protection overlay.”

Councilman Marshall Stair abstained from the voting because he and Attorney King work for the same firm.

The vote was 6-2 with Della Volpe and Wallace voting “No.”