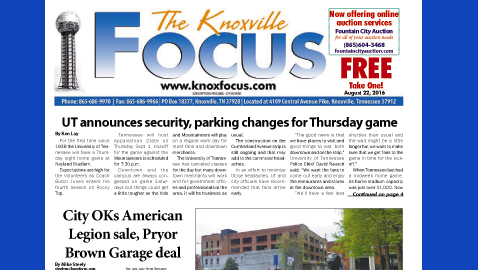 For the first time since 1938 the University of Tennessee will have a Thursday night home game at Neyland Stadium.

Expectations are high for the Volunteers as Coach Butch Jones enters his fourth season on Rocky Top.

Tennessee will host Appalachian State on Thursday, Sept. 1. Kickoff for the game against the Mountaineers is scheduled for 7:30 p.m.

Downtown and the campus are always congested on game Saturdays but things could get a little tougher as the Vols and Mountaineers will play on a regular work day for most fans and downtown merchants.

The University of Tennessee has canceled classes for the day but many downtown merchants will work and for government offices and professionals in the area, it will be business as usual.

The construction on the Cumberland Avenue strip is still ongoing and that may add to the commuter headaches.

In an effort to minimize those headaches, UT and city officials have recommended that fans arrive early.

“The good news is that we have places to visit and good things to eat, both downtown and on the strip,” University of Tennessee Police Chief David Rausch said. “We want the fans to come out early and enjoy the restaurants and stores in the downtown area.

“We’ll have a few less shuttles than usual and the wait might be a little longer but we want to make sure that we get fans to the game in time for the kickoff.”

When Tennessee last had a midweek home game, its home stadium capacity was just over 41,000. Now Neyland Stadium seats 102, 455 and most if not all of those seats will be filled.

The Vols are in the preseason Top 10 and they are picked by most college football pundits to win the Southeastern Conference’s Eastern Division.

“It’s virtually a normal game day, except that it’s on a Thursday and not a Saturday,” said David Elliott, UT’s assistant athletic director in charge of event management. “We always have fans who come early and the one thing that we would like to change is that we would like to see our fans enter the stadium early.

“SEC Nation [an ESPN SEC Network Show] will have a small crew there and they’ll be broadcasting on the field at noon.”

Some other changes include limited Knoxville Area Transit Shuttle Service. There won’t be shuttle service from Farragut or from Market Square. Parking garages will be open but may be filled by area workers.

Fans are encouraged to take KAT’s regular bus service to campus. Game day parking rates will go into effect at 3 p.m. Regular trolley services will also shut down at 3 p.m.

For other changes, fans are asked to visit www.katbus.com  .knoxvilletn.gov.

The University of Tennessee will also implement a new clear bag security policy and fans are encouraged to visit www.utsports.com  and look under the game day section for security protocol and pregame festivities.

Fans are encouraged to come early and be patient before the Volunteers open their season and their quest for an SEC Championship.