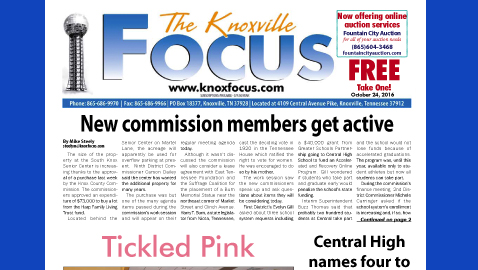 The size of the property at the South Knox Senior Center is increasing thanks to the approval of a purchase last week by the Knox County Commission. The commissioners approved an expenditure of $73,000 to buy a lot from the Harp Family Living Trust fund.

Located behind the Senior Center on Martel Lane, the acreage will apparently be used for overflow parking at present.  Ninth District Commissioner Carson Dailey said the center has wanted the additional property for many years.

The purchase was but one of the many agenda items passed during the commission’s work session and will appear on their regular meeting agenda today.

Although it wasn’t discussed the commission will also consider a lease agreement with East Tennessee Foundation and the Suffrage Coalition for the placement of a Burn Memorial Statue near the northeast corner of Market Street and Clinch Avenue. Harry T. Burn, a state legislator from Niota, Tennessee, cast the deciding vote in 1920 in the Tennessee House which ratified the right to vote for women. He was encouraged to do so by his mother.

The work session saw the new commissioners speak up and ask questions about items they will be considering today.

Interim Superintendent Buzz Thomas said that probably two hundred students at Central take part and the school would not lose funds because of accelerated graduations. The program was, until this year, available only to student athletes but now all students can take part.

During the commission’s finance meeting, 2nd District Commissioner Michele Carringer asked if the school system’s enrollment is increasing and, if so, how much. The answer, from Gary Spencer the  Director of Finance, was that the enrollment in county schools is only up by one-half of one percent, not the 2.5 percent increase the state sets before allotting additional funds.

Spencer also said the county system has a shortage of school nurses and that some schools have a nurse assigned to look after one student at about $60,000 per year.

Commissioner Hugh Nystrom of the 4th District asked that an agenda item involving the approval of the Southwest Sector Plan update be discussed. The matter will be discussed during the regular meeting as part of the commission’s zoning meeting today.

In other matters a resolution on a contract amendment with DataBank was deferred because the change hasn’t been finalized. The contract involves document management for the court system.