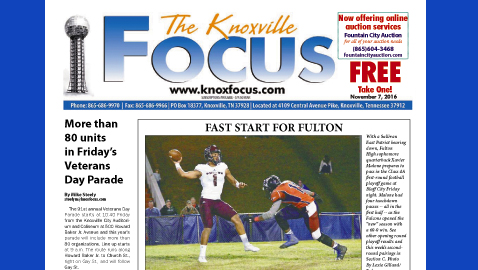 The 91st annual Veterans Day Parade starts at 10:40 Friday from the Knoxville City Auditorium and Coliseum at 500 Howard Baker Jr. Avenue and this year’s parade will include more than 80 organizations. Line up starts at 9 a.m. The route runs along Howard Baker Jr. to Church St., right on Gay St., and will follow Gay St.

Sponsored by the American Legion Post 2, the downtown parade draws a huge crowd of on lookers and Lee Dalton, Assistant Parade Marshal, told The Focus that there are usually several late entries.

The Grand Marshal will be COL Joe Edelman, who enlisted in the USMC in 1941  and served in the Pacific during WWII. The parade will halt briefly at about 11 a.m. to honor all the veterans of all the military services.