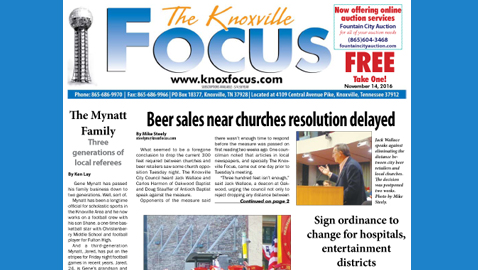 By Mike Steely
steelym@knoxfocus.com
What seemed to be a foregone conclusion to drop the current 300 feet required between churches and beer retailers saw some church opposition Tuesday night. The Knoxville City Council heard Jack Wallace and Carlos Harmon of Oakwood Baptist and Doug Stauffer of Antioch Baptist speak against the measure.
Opponents of the measure said there wasn’t enough time to respond before the measure was passed on first reading two weeks ago. One councilman noted that articles in local newspapers, and specially The Knoxville Focus, came out one day prior to Tuesday’s meeting.
“Three hundred feet isn’t enough,” said Jack Wallace, a deacon at Oakwood, urging the council not only to reject dropping any distance between beer vendors and churches but also to strengthen the current regulations.
“I’m not interested in protecting landlords,” he said in response to claims that more and more churches are locating in shopping centers and by locating there it inhibits landlords from renting space to beer sellers.
Oakwood pastor Carlos Harmon also asked the council to prohibit any church from serving beer for special events, saying, “Removal of the buffer zone is shortsighted.”
Stauffer asked the council to reduce the number of retailers and cited churches who have schools and playgrounds for children. Quoting scripture Stauffer said the “Bible explicitly says it should not be done.” He noted that all four major cities in the state have restrictions on the distance between beer sales and churches.
“Fairness demands that we move it until two weeks,” Councilman Nick Della Volpe said.
Councilman George Wallace, who had voted with the majority to drop the distance, said he had no objection to the delay and added the current regulations doesn’t stop the sale of liquor near a church if a business gets a state license.
“We’re trying to be fair to businesses,” he said.
Councilman Marshall Stair said the proposed ordinance “doesn’t do a lot” and added, “It makes sense to go ahead and vote it.”
“There hasn’t been a lot of complaints,” Councilwoman Brenda Palmer said.
“The whole culture is changing,” said Councilman Duane Grieve, who had opposed the change but added, “I’ve changed my mind over the past several months.”
When Councilman Wallace agreed with the idea of delaying a decision the council voted 5-4 to postpone the matter. Voting to postpone were Councilmen Mark Campen, Della Volpe, Daniel Brown, Nick Pavlis and Wallace.
Rev. Rodney Arnold, who led the proposal to drop the distance, spoke before the vote and said the churches in his group has grown to fifteen.
“This is not a matter of theology, the current state law negates city law and doesn’t protect churches,” Arnold said.