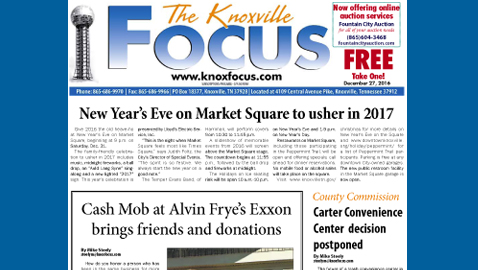 How do you honor a person who has been in the same business for more than 60 years and has been a community leader, volunteer, and a respected character? Alvin Frye isn’t well and his EXXON Station on Broadway in Fountain City is schedule to close at the last day of December, but not before his customers, friends and family pay him a tribute.

Knox County Mayor Tim Burchett invited everyone to visit Frye’s Exxon at 5306 Broadway to be part in a Cash Mob, similar to the events Burchett sponsored over the past few years beginning in South Knox County following the closing of the Henley Street Bridge for repairs.

Up until his illness the spry elderly man was at the service station daily. Two years ago he was honored on his 90th birthday and has been “Man of the Year” in Knox County. There’s no counting the number of people who Frye and his wife, Mildred, have helped. When his station was threatened with closing a few years ago Frye said he was worried more about his employees than himself.

Tommy, Alvin’s son, said although the station will close at the end of this month he will be around through January finishing car repairs and tending to the garage.

Alvin’s wife, Mildred, was present at the Cash Mob and watched the hundreds of people coming and going during what must have been the busiest day in recent memory. Cars were backed up in long lines and Michael Grider and other Burchett staff members were talking to customers and getting signatures on large “Thank You” cards to recognize Frye and his employees. He will be 93 years old in January. Many gas customers were old friends of the Frye family and others parked nearby to came to visit and to donate to the “Alvin Frye Fund” that the Fountain City Lions Club began. Funds will go to the much-appreciated elderly citizen and to his family for his care.

The “Cash Mob” began at 3 p.m. Thursday and cars were already lined up to get gas. There were so many customers that the employees could not get to every car and in an unusual occurrence many customers actually pumped their own gas. Several people donated in the Exxon Station office and donors included several elected officials.

Mayor Burchett talked with many customers and visitors and he and his wife, Kelly, and daughter Isabel, signed the Thank You card appropriately on the hood of a car parked at a gas pump. The mayor called Frye “a real hero.”

Frye, a Navy veteran of the World War II and the Korean War, could not attend the event but his wife was there and seemed very pleased with the turn out and the number of people who visited with her.