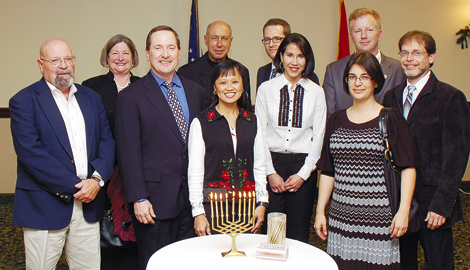 Members from across the Knox County Republican party gathered to celebrate the holiday season in a room adorned by a large Christmas tree and traditional Christmas decorations. Yet, shining as if a bright beacon of diversity, a gold menorah, stood in the center of the room.

According to party members, the Knoxville Republican Jewish Coalition has been active within the Knox County Republican party for the past three years. Aaron Margulies, among others, was present on behalf of the coalition to help usher in the holiday season. Margulies told the Hanukkah story and offered a prayer in Hebrew as his wife lit the menorah.

Ruthie Kuhlman, candidate for Knox County GOP chair and sitting president of the West Knox Republican Club, believes that inclusion is critical to the future success of the Republican Party.

“We’ve got to reach out and open up,” Kuhlman told The Focus. “Regardless of race, religion, gender, or socio-economic background, we need all Republicans to come together to make our party work.”

While the Republican Party is not widely regarded for its diversity, recent political defeat both locally and nationally has sparked a progressive wave throughout the party, particularly in Knox County.  Each elected official present conscientiously wished those in attendance both a Merry Christmas and a Happy Hanukkah.

Kuhlman also expressed her desire to see more continuity throughout the party county-wide. The local party is segregated into smaller chapters that include the North, South, and West Knox Republican Clubs. Kuhlman maintains that these individual groups must work closer together.

“It’s a critical time for the Republican party,” she stated. “I feel strongly that our various chapters should come together to represent the entire Knox County Republican Party at least twice per year, perhaps for the next Holiday season.”