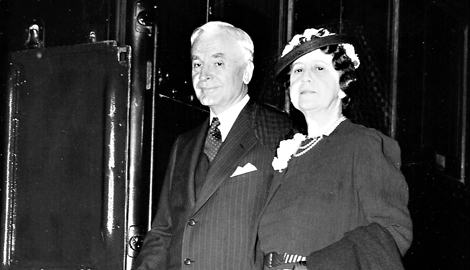 From the author’s personal collection.
Cordell and Frances Hull boarding a train in 1939.

Cordell Hull had served in the U. S. House of Representatives since 1906, with one brief two-year interlude, when he announced he would be a candidate for the United States Senate in 1929.  It was rare, at that time, for a prospective candidate to declare a candidacy so far in advance of an election, but there were unusual circumstances surrounding Hull’s announcement.  Senator Lawrence D. Tyson of Knoxville had died in office on August 24, 1929 and Governor Henry Horton had to appoint a successor.

Horton had first appointed Luke Lea, who had served one term in the United States Senate from 1911 – 1917 before being defeated by Congressman Kenneth D. McKellar in a special 1915 primary.  Cordell Hull had been one of the architects of that particular primary election, which had been held a year in advance of the 1916 general election.  It is also the only modern instance of a primary having a run-off election between the two top vote getters in Tennessee history.  Lea had been eliminated in the first primary and had returned to preside over his growing publishing empire.  Lea was the owner and publisher of the Nashville Tennessean.  Eventually, he would own newspapers in Knoxville and Memphis as well.  Senator Tyson had at one time owned the Knoxville News-Sentinel, but sold the newspaper after having been elected to the United States Senate in 1924.

Lea turned down the senatorial appointment offered to him by Governor Horton, who then offered the appointment to William E. Brock of Chattanooga.  Brock accepted the appointment and Hull’s announcement he would be a candidate came on the heels of Brock’s appointment.  Hull made it quite clear he did not sought nor did he want the appointment.  In early September of 1929, Hull said he would run for the six-year term in 1930.  Congressman Hull likely went to the trouble of announcing his own candidacy so early to prevent the newly appointed Senator Brock from becoming too entrenched, as well as serving notice should Brock run, he would face stiff opposition inside the Democratic primary.  William E. Brock had not even taken the oath of office before Hull announced he was running.

Cordell Hull was highly respected in Tennessee and, in time, would gain a national reputation.  Hull was one who jealously guarded his reputation and would fret for days about negative stories appearing in the press.  Cordell Hull very carefully cultivated his own image; although having been actively involved in politics for decades, he was not without enemies.  The two strongest political machines in Tennessee, those of E. H. Crump of Memphis and Mayor Hillary Howse of Nashville, were not quite ready to line up behind Hull.

Hull was by no means a perfect candidate.  Never comfortable with large crowds, Hull was not especially adept at one-on-one campaigning.  Neither was he an inspiring speaker in an age when truly great orators held public office.  In fact, Hull spoke with a distinct lisp, causing him to pronounce his “r’s” as if they were “w’s”.  That may well have been due to the dentures Hull wore, but in any event, it was quite noticeable.

Still, Cordell Hull had a rather majestic appearance; tall, stately, with a full head of white hair, Hull looked the part of a statesman.  Hull was also aided by his wife, Frances, whom he had married late in life.  Hull had been so preoccupied with his work in Congress and politics that John Nance Garner, who was later to become Speaker of the House and vice president under Franklin D. Roosevelt, had speculated the odds of Hull ever getting married were quite remote.

Yet Hull did marry and Frances Hull aided her husband in every aspect of his life.  Mrs. Hull was active in Democratic organizations, helped to raise funds for his campaigns, and oftentimes ran the campaign headquarters.  Frances Hull was truly a great asset to her husband.

No real threat to Hull’s candidacy for the United States Senate emerged until the summer of 1930 when Congressman Joseph W. Byrns of Nashville began making noises about running.  Byrns had come to Congress two years after Hull, winning his first Congressional election in 1908.  Unlike Hull, Byrns had survived the Republican tidal wave in 1920 and retained his seat in the House.  Yet, like Hull, “Jo” Byrns was a highly respected member of Congress and one of the more senior Democrats in the House, as well as a high-ranking member of the Appropriations Committee.  Byrns would have little trouble raising money for a Senate race and it was readily apparent Mayor Howse of Nashville, as well as E. H. Crump were encouraging his candidacy.

Still, there were some disturbing signs before Jo Byrns launched his campaign for the Democratic nomination for the United States Senate.  Byrns had been invited to speak in Dayton, Ohio at a Jefferson Day Dinner in April of 1930.  Byrns was unable to keep his speaking date, as his office announced the Congressman was suffering from an acute case of influenza.  Byrns was confined to his hotel and under the care of a physician.  Congressman Gordon Browning kept the speaking engagement for Byrns.  Later, Byrns would admit he had suffered from a mild heart attack brought on by his bout with the flu.

It was not a good sign for a prospective candidate for the U. S. Senate who would have to move throughout Tennessee during the hottest time of the year.  It was an arduous task for a healthy man in the blistering heat of a Tennessee summer and Jo Byrns seemed to be distinctly unhealthy.

Undaunted by his health scare, Congressman Joseph W. Byrns made his own official announcement of his candidacy on June 23, 1930.  Byrns said he would indeed be a candidate for the Democratic nomination and would relinquish his seat in the House of Representatives, a seat he had held for twenty-two years.  Byrns had qualified for the Senate at almost literally the last minute; a group of friends presented the Secretary of State’s office with the necessary nominating petitions at 11:45 p.m., fifteen minutes before the midnight filing deadline.

Byrns said in his announcement he had “yielded to an ambition which I have cherished for a number of years” in running for the U. S. Senate.  Byrns said his candidacy was “in response to assurances of support from friends in every section of the state.”

The candidacy of Joseph W. Byrns for the United States Senate has to be one of the briefest serious candidacies in the history of Tennessee.  Byrns suffered another mild heart attack while actually giving the opening speech of his campaign.  Byrns got through the speech with great difficulty, which is hardly surprising.  The Congressman was immediately put to bed and treated by no less than three doctors.  On July 1, 1936, Joseph W. Byrns announced he was withdrawing from the Senate race and would instead seek reelection to his House seat.

Byrns’s withdrawal removed the most serious obstacle to Cordell Hull’s nomination in the Democratic primary.  Hull still faced Andrew L. Todd of Murfreesboro, a wealthy businessman who apparently spent freely from his own bank account.  Far less well known than Hull, Todd began purchasing large advertisements in Tennessee newspapers attacking Congressman Hull’s record ferociously.  One Todd ad stated Hull “has proven to be against the people’s interests”.  The advertisement went on to say Hull had voted against suffrage for women, against legislation for the “rehabilitation” of former soldiers, as well as agricultural and industrial workers.  Todd scolded Hull for having voted against increasing the pensions of veterans who had fought in the Spanish-American War.  Todd also castigated Hull for having opposed the McNary – Haugen Bill, which he claimed was “the only legislation ever introduced in Congress to put agriculture on a profitable basis”.

Todd demanded, “What can Cordell Hull do in six years in the United States Senate that he could not have done in twenty-two years in the House of Representatives if he had tried?”

Cordell Hull was legendary for his abundance of political caution and Andrew Todd excoriated Hull for refusing to take positions on a number of controversial bills.  Despite his caution, Cordell Hull also possessed a volcanic Tennessee temper.  It has been said Hull was quite proficient in the use of cuss words and approached real artistry in his use of profanity when provoked.  Some years later, Cordell Hull was said to have the “foulest mouth” in President Roosevelt’s Cabinet.  It could hardly be a surprise that Todd’s advertising campaign infuriated Hull.

Cordell Hull could nurse a grudge every bit as well as Tennessee’s senior United States senator, K. D. McKellar.  Hull, like McKellar, could be positively relentless in pursuing an enemy, a trait the future Secretary of State may have inherited from his father, William.  According to author Irwin Gellman, in his excellent book Secret Affairs, William Hull may have served in the Confederate Army or at least sympathized with the Confederate cause.  This evidently led to his being attacked by three Yankees who savaged him, along with shooting off part of his nose and they subsequently threw his body down a ravine, thinking him dead.  Not only did William Hull not die, he lived to hunt down at least one of his attackers and killed him.

Hull, although not personally wealthy like Andrew Todd, had the political resources and finances to respond with attack ads of his own.  Hull defended his record in the House of Representatives and hit back at A. L. Todd.  Congressman Hull claimed he had supported every measure to help farmers and servicemen and pointed out he had been a volunteer in the Spanish – American War himself.  Hull said he had voted for lower tariffs and “all laws reducing federal taxes”, although it was Cordell Hull who was the father of the income tax.  Hull closed his own campaign advertisements by concluding, “Cordell Hull has told the truth about his own and his opponent’s records.”

Hull indeed did not neglect Andrew Todd’s political and personal record and charged A. L. Todd had “lobbied to increase interest rates from 6 percent to 8 percent at the time being a money lender”.  Hull also pointed out Andrew Todd “had stayed at home during two wars, so that he could boast of ‘making a million dollars in 20 years’.”  In case anyone missed that particular point, Hull noted Todd “carried on a lucrative farm loan business while the flower of Tennessee manhood fought in France for democracy.”

Todd’s attacks on Hull’s Congressional record seemed not to stick.  Todd claimed Hull had voted against the Volstead Act, yet the Congressman’s campaign for the Senate had been endorsed by the Anti-Saloon League.

Many observers thought the senatorial race would be close, but Election Day brought Cordell Hull a sweeping victory.  Hull won approximately 140,000 votes to just over 79,000 for Andrew L. Todd.

Hull won the general election easily and was on his way back to Washington, D. C. as Tennessee’s junior United States senator.