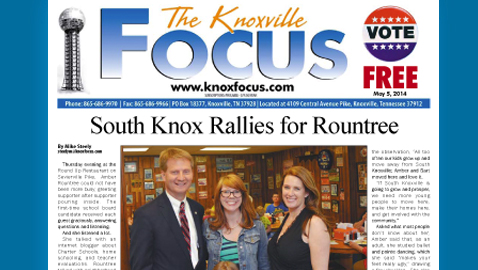 Thursday evening at the Round Up Restaurant on Sevierville Pike,  Amber Rountree could not have been more busy, greeting supporter after supporter pouring inside. The first-time school board candidate received each guest graciously, answering questions and listening.

And she listened a lot.

She talked with an internet blogger about Charter Schools, home schooling, and teacher evaluations. Rountree talked with neighborhood residents about the school board and pointed out the superintendent is an employee of the board and not their superior.

“I consider myself a Knoxville girl after moving here to attend the University of Tennessee. I have lived all over our great city but my husband and I fell in love with South Knoxville where we live with our dog Banjo,” she said.

Rountree’s husband, Bart, was circulating through the restaurant greeting folks on his own and even carrying food to a few disabled folks.  Bart and Amber Rountree are a perfect example of a young professional couple choosing to make their home in South Knoxville.

One long-time South Knoxville resident made the observation, “All too often our kids grow up and move away from South Knoxville; Amber and Bart moved here and love it.

“If South Knoxville is going to grow and prosper, we need more young people to move here, make their homes here, and get involved with the community.”

Asked what most people don’t know about her, Amber said that, as an adult, she studied ballet and pointe dancing, which she said “makes your feet really ugly,” drawing a few chuckles.  She also said that last year she ran the Hatfield and McCoy marathon along the West Virginia and Kentucky state line, never realizing until she got there how mountainous the region is and what a tough run it would be. But the deceptively petite exterior obviously hides a steely determination.

Amber Rountree did it anyway.

That’s the attitude Amber Rountree takes in life and in her enthusiastic and energetic campaign to win the Ninth District seat on the Board of Education.  Dissatisfied with the current administration, Rountree has observed conditions up close, working as a school librarian.  “We’re stressing testing, pushing students to the limit and we’ve reached the point where we’re inhibiting teachers’ ability to actually teach.  I believe we need put our resources into people, not just data.”

“Schools need to be about people,” Rountree emphasized.  “The students, parents, teachers, custodians, everybody makes a school.”

“The incumbent school board members just parrot what the superintendent wants done.  There seems to be too little independent thinking or questioning of policies,” Rountree said.  “What good does it do us if every single student graduates, yet only 21% are prepared to continue their educations or get a job?”

Rountree pointed out the preparation rate, meaning those students ready to further their educations or join the workforce, for South Knoxville youngsters is “nothing less than appalling.”

“11% of students graduating from South-Doyle are ready to go onto a college or get a job,” Rountree says earnestly.  “South Knoxville deserves better!”

Supporters continued to come in as the South Knoxville landmark restaurant filled up with all sorts of people. People who were getting off work, teachers, retired men and women, and folks like Knox County Mayor Tim Burchett, Commissioner Tony Norman and his wife Janie, both retired teachers, and many state and local officials.   Unlike most such functions, the crowd was mostly “ordinary” folks, who far outnumbered the politicos.

Running against an incumbent isn’t easy but Rountree is optimistic.

“I won’t be just another rubber-stamper while I represent the people of South Knoxville. It is imperative that our board members research and make educated decisions when voting on policies that affect our students,” she said.

Rountree has a degree in Early Childhood Education from UT and pursued a Masters  Degree in Library Science. She was a librarian at Halls Elementary School and spent lots of time teaching children research skills.

An outspoken supporter of teachers and students, Rountree has addressed the school board and the county commission often and articulately.   Like most South Knoxvillians, Rountree possesses a fierce honesty and is direct and to the point.

“I believe the best way I can effect positive change for South Knoxville students would be as a school board member,” Rountree said simply.

From the excitement and enthusiasm of the supporters at the Round Up Restaurant, the spunky South Knoxville woman may be elected Tuesday, pulling off a major upset.