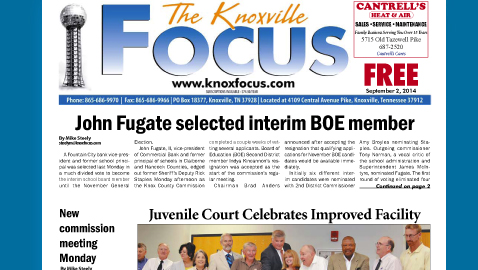 A Fountain City bank vice-president and former school principal was selected last Monday in a much divided vote to become the interim school board member until the November General Election.

Chairman Brad Anders announced after accepting the resignation that qualifying applications for November BOE candidates would be available immediately.

John Fugate is distantly related to BOE Chairwoman Lynn Fugate but his positions on questions about the school administration and the Superintendent have been less than supportive of her or the administration. For instance, Fugate told the commission workshop two weeks ago that he would not have voted to extend McIntyre’s contact another year.

“I am tremendously disappointed,” she said.

“This is politics, this is bad,” McKenzie said.

Norman rebutted, saying, “I though Mr. Staples was a wonderful candidate.” He added that there was no “fix”in and said he spoke to people within the 2nd district and outside the district as well.

Smith said he knows Fugate, adding that Fugate supported a candidate that opposed Smith in earlier races, but added, “The second district dynamics have changed.”

Wright told the commission he had no idea how he would vote “until today” and said he had talked to all of the candidates.

Hammond said he has spoken to no one on the commission about his vote.

“We’re entering a dangerous trend. There are forces at play trying to be the puppet masters in Knox County,” McKenzie said.

The final vote, to select Fugate as the interim school board member, saw Broyles and McKenzie vote “No.”

The commissioners also split on the vote to appoint Ray Jenkins a Judicial Magistrate to replace resigning Magistrate Richard Majors. Broyles and Anders supported Maria Danker but all of the other commissioners voted for Jenkins.