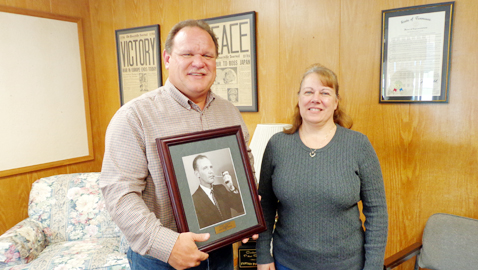 Photo by Mike Steely.
Butch Inman of Dott Baker Insurance Agency holds a photo of his grandfather, the founder of the company. Teri Huskey, Customer Service Manager, joined Inman for the photo.

Can you imagine a family company that’s been in business for 60 years still being under the same family ownership? Can you imagine three generations offering insurance?

The Dott Baker Agency, at 6334 Chapman Highway, is 60 and the founder’s grandson, Butch Inman, is proud of the family company’s heritage and service.

His grandfather, Dott Baker, was active in the company he founded until a year before his death in 2012. He began the company as a real estate firm and started the insurance company on July 1, 1954. Dott developed a lot of the South Knoxville subdivisions. Inman said Dott came in to work every day until the day he fell in front of the office and broke his hip, although afterward the family would wheel him in and he’d sit at his desk and work. He was 92 years old when he passed away.

In his later years Dott sold the real estate company to his daughter and her husband, Suzanne and Mark Inman, and Butch took the insurance business in 2002 after 12 years working at Denso. Butch Inman is joined by Teri Huskey who has been the Customer Service Representative for 16 years.

Inman said his family’s involvement over the years with “personal service” is what sets Dott Baker Insurance Agency apart from other businesses.

“We’re an independent agency so we have 12 to 15 different companies and can usually find you a pretty decent rate,” Inman added. “Safeco has been in the office since 1966 and we have Hartford, Allied, Progressive, Grange and others.”

The agency offers policies for home, auto, boat, mobile homes, motorcycles, RVs, ATVs, classic autos, rental property and renter’s insurance.          Many of Dott Baker Agency’s clients are from Knoxville and South Knoxville but he has clients as far away as Johnson City and Goodlettsville.

Inman and his wife, Debi, have a daughter, Erin, and a son Mark Inman III. Mark’s wife is Elizabeth Inman and they have one child, Ruby. Mark and his wife are members of the Valley Grove Baptist Church on Chapman Highway.

Butch Inman takes great pride in the family’s heritage in the business and proudly posts a photo of his grandfather on the wall of the first room at the office.

You can call Butch or Teri at Dott Baker Agency at 577-2566 or reach them by email at DBakerAgy@aol.com.