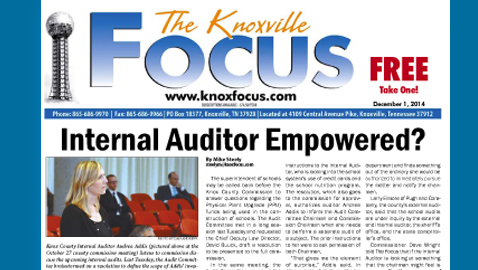 The superintendent of schools may be called back before the Knox County Commission to answer questions regarding the Physical Plant Upgrade (PPU) funds being used in the construction of schools. The Audit Committee met in a long session last Tuesday and requested the Chief Deputy Law Director, David Buuck, draft a resolution to be presented to the full commission.

In the same meeting, the Audit Committee reworked the instructions to the Internal Auditor, who is looking into the school system’s use of credit cards and the school nutrition program. The resolution, which also goes to the commission for approval, authorizes auditor Andrea Addis to inform the Audit Committee Chairman and Commission Chairman when she needs to perform a separate audit of a subject. The prior instructions to her were to ask permission of both Chairmen.

“That gives me the element of surprise,” Addis said. In other words, if she’s auditing a department and finds something out of the ordinary she would be authorized to immediately pursue the matter and notify the chairmen.

Larry Elmore of Pugh and Company, the county’s external auditor, said that the school audits are under inquiry by the external and internal auditor, the sheriff’s office, and the state comptroller’s office.

Commissioner Dave Wright told The Focus that if the Internal Auditor is looking at something that the chairman might feel is inappropriate, and to keep an audit from becoming political, they can halt that part of an audit. While the discussion was about the school system problems, the direction to the Internal Audit are general and would apply to any authorized audit for any department of the county.

The PPU audit, conducted over several months and concluded but not reviewed until last Monday by the Audit Committee, raised several questions by committee member and the Law Director. Chief Law Director David Buuck said the use of upgrade or upkeep school budgeted funds for new construction was illegal, if not criminal. He said the PPU used in new construction are required to be approved by the county commission, which was not done.

Chairman Joe Carcello said flatly that “If a PPU account is used for (new) construction purposes, then that is illegal.” “It’s pretty clear that policy was not followed,” he said.

Addis replied, “That did happen.” She said there has been a lack of tracking of some school system dollars making it difficult to audit.

The discussion centered on the land purchase and construction of Northshore Elementary, the Hardin Valley school and Carter school.

Addis confirmed that the PPU funds were not “transferred” to other funds within the school system but were used directly to help fund new construction. She also said that all of the school’s expenditures should be individually accounted.

“Something has gone wrong,” Commissioner Wright said, “At least 2 or 3 things before us now that the commission needs to hear.” The actual cost of a new school may not be known if PPU funds are used along with the construction funding.

“We need more discussion about the finances of Knox County,” Wright said.

County Finance Director Chris Caldwell confirmed that the “state comptroller’s office has been on site” concerning the investigation of the school system’s finances.

The external auditor report of the school’s finances, presented by Ted Hotz and Elmore, found problems with seven schools which ended several years with negative balances in their school activity funds. He also said they found one school had paid a person from funds with no taxes withheld. Hotz said the final report is in draft stage now because of the school investigations and is not due to the state until the end of December. The external auditor also looked at funds allotted to teachers each year for supplies.

While the school system may be planning to hire someone to oversee the activity funds, the feeling on the Audit Committee is that the Internal Auditor should get an additional employee assigned only to oversee school finances.  External Auditor Elmore suggested the additional employee which would bring the Internal Audit department to four people. Addis said a third person has been hired and welcomed a fourth employee. She said those people assigned to her could also help in other areas of audit when needed.

Commissioner Mike Brown called the school hiring its own auditor a “waste of money.”

Wording of the resolution, to be presented to the commission, will be worded by Attorney Buuck. Commissioner Wright will present it to the full commission.