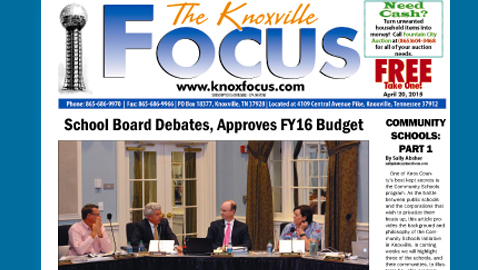 The budgets have been “iterative,” with revisions announced almost weekly. McIntyre announced the latest revision on Monday – the administration had “turned over every rock” and managed to find $75K to partially fund the $280K AVID program. This will pay the dues, training and materials, but left the personnel expense up to individual schools.

While this was good news for most AVID schools, it was a major disappointment for Cedar Bluff Middle School. CBMS lost three related-arts teaching positions in the budget, including that of AVID teacher Betsy Barkow. CBMS is a small school, and there are no teacher positions to reallocate. CBMS students have been among the most passionate about saving the AVID program.

Not accepting defeat, 8th District BOE member Mike McMillan proposed adding up to $30M for a Gibbs Middle School to the Capital Fund budget, with the caveat that the school would be financed by the county. According to Director of Finance Ron McPherson, KCS already pays around $33M each year to service the current debt, with $11M coming out of the General Fund.

All budgets were ultimately passed by the board, but not without considerable discussion on a few line items. Public forum speakers Kim Waller and Lauren Hopson reminded McIntyre that the collaborative conferencing (PECCA) agreement signed in December included a 4% raise for teachers, and asked why he did not bring his proposed reduction of a 3% raise back to PECCA.

Brenda Owensby had a number of suggestions on how to further cut spending, and pointed out that for every 13 teachers, there is an administrator making 3 to 4 times the average teacher salary. You can watch these 5 minute speeches on the SaveOurSchoolSystem YouTube channel.

There was also a heated debate between the Board, McIntyre, and David Buuck of the law department, thanks to careful due diligence and research by Amber Rountree and Patti Bounds.

Rountree asked why the Broad Academy grant agreement didn’t come before the board for approval. Who granted the superintendent unilateral authority to approve such contracts without Board approval?

Buuck said his department only saw the agreement a few weeks ago, when Rountree and Bounds separately asked him to look into it. He said there are indemnity clauses in the agreement that are not legal, or enforceable.

McIntyre defended not bringing the agreement before the board, saying KCS policy DM states that “The Knox County Board of Education authorizes the Superintendent to accept receipt of grant awards with the following exceptions: 1. Where the grant award is new and exceeds $50,000 over the total grant period…” Buuck said this policy is in violation of state statute, which says that the BOE must approve ALL grants.

On Tuesday, Buuck provided additional details, and a copy of the agreement, to The Focus. The superintendent notified the Board that he had hired a BROAD Academy fellow and that the BROAD Academy was going to pay 50% of the salary of $90,000.00.  The BOE was never given a copy of the grant agreement nor was the agreement reviewed by the law director’s office.  It was signed by the Superintendent without Board approval.

This agreement, for the newly created position of Director of Planning and Improvement, dictates the duties of the employee and the time off which must be granted to the employee and that benefits must be paid to the employee.  The finance office uses a figure of thirty percent (30%) as additional expense for benefits.  Of this amount, BROAD will reimburse the taxpayers $27,900.00.

This position is the fourth Broad Academy fellow KCS has hired. According to the KCS website, the Broad Foundation pays 50% of the first year salary and 25% of the second year salary.

The taxpayers of Knox County sure got a rotten deal when McIntyre signed this agreement.

Rountree explained the Broad Academy, reading from a Washington Post article: “The California-based foundation, built on the housing and insurance empire of billionaire Eli Broad, has made “transforming K-12 urban public education” a major priority. Its training and placement of top administrators in urban districts across the country and support for charter schools, school turnarounds, merit pay and other market-based reforms have put it at the center of a polarized national debate about education policy.”

Rountree said that these goals do not match the goals of our school system. Broad looks for leaders who are “disruptive.” McIntyre is a Broad Superintendent Academy graduate. Rountree added, “I want to do what is best for the kids in my district, not what some billionaire in California is telling us to do.”