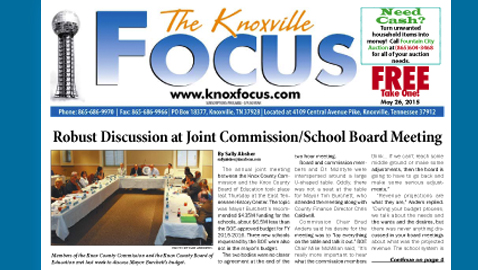 The annual joint meeting between the Knox County Commission and the Knox County Board of Education took place last Thursday at the East Tennessee History Center. The topic was Mayor Burchett’s recommended $435M funding for the schools, about $6.5M less than the BOE-approved budget for FY 2015-2016. Three new schools requested by the BOE were also not in the mayor’s budget.

The two bodies were no closer to agreement at the end of the two hour meeting.

Board and commission members and Dr. McIntyre were interspersed around a large U-shaped table. Oddly, there was not a seat at the table for Mayor Tim Burchett, who attended the meeting along with County Finance Director Chris Caldwell.

Commission Chair Brad Anders said his desire for the meeting was to “lay everything on the table and talk it out.” BOE Chair Mike McMillan said, “It’s really more important to hear what the commission members think… If we can’t reach some middle ground or make some adjustments, then the board is going to have to go back and make some serious adjustments.”

“Revenue projections are what they are,” Anders replied. “During your budget process, we talk about the needs and the wants and the desires, but there was never anything discussed in your board meetings about what was the projected revenue. The school system is getting a $14-15M increase in growth this year…growth that has doubled that of any other department in the county. The general government side has a lot of needs also.”

He continued, “There are a lot of things that we have sacrificed for the sake of the school system taking most of the growth.” He also said that when Race to the Top dollars came along, they knew that the money would be going away, and cautioned the BOE that they may not have the growth to provide that once the grants ended.

Board member Doug Harris advocated for a tax increase, joined by Anders and Terry Hill representing the sixth district, which wants a new Hardin Valley Middle School. Several commissioners asked about BEP (Basic Education Program) funding. This is the funding each district gets back from the state.

BEP funding, more than local funding, is the problem. An analysis by the mayor’s office last year showed that Knox County ranks 4th of the 95 counties, and 11th of the 140 Districts in the state in terms of local per-pupil funding.

Commissioner Ed Brantley asked, “Hypothetically, if the Commission gives the School Board what they are asking for, it’s my understanding that the Mayor will veto that. Are there enough votes to override a veto? … Is there an amount of money you all can live with other than the requested amount?”

Hill said Knox County hasn’t had a tax increase in 15 years, and suggested that a “modest” tax increase would affect all citizens and take care of county-wide needs.

Brantley asked, “How big of a tax increase does it have to be? How many schools will you build with that tax increase? Will you guarantee they’re going to be built, or is it going to be more people in the AJ Building?  The people in Gibbs and Hardin Valley, they’re willing to pay for a tax increase, but I don’t know that people in other parts of the county are.”

Commissioner Brown said, “It’s not how much you spend, but how you spend it. You’re talking about $445M. The public thinks that’s all you get, but last year, over $500M was spent by this school board (including grants). So how much is enough?”

Regarding the Capital Improvement Plan, Commissioner John Schoonmaker said that the $50M bond to build Hardin Valley Academy will end up costing taxpayers $92M with interest. He said he didn’t think the public realizes that a $35M Hardin Valley Middle School is really a $65M school. Or that the current total county debt, with principle and interest, is about $925M.

Personnel are the largest part of the KCS Budget (78%). Reminiscent of 2012, BOE members said if their budget isn’t fully funded, teachers will be fired.  Compare this to Williamson County, where Superintendent Looney found enough money in his budget to give teachers a 5% raise after the commission refused to give the District more money.

Commissioner Bob Thomas said, “I hate that the public thinks the problem is the mayor, or commission won’t give the money, the reality is that our society has changed. I can’t imagine a tax increase, because the average guy… their income has either stayed the same for over five years or gone down.  We can’t spend money we don’t have, and we can’t just borrow more money.”

The Commission meets this afternoon for a public hearing and will vote on the Knox County budget on June 15.