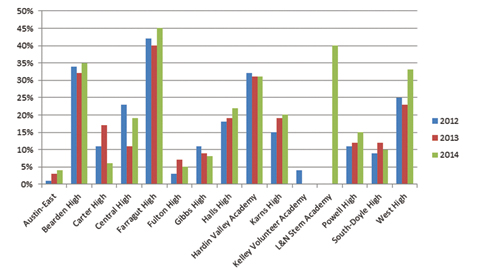 For 2014, the Tennessee State Report Card indicates that the high school graduation rate in Knox County was 88.7%.  But 11.3% of students who entered ninth grade did not graduate with a regular diploma, and will not be ready to be trained for anything other than a manual minimum wage job. And the situation isn’t much better for many of those who do graduate.

At the most basic level, parents send their kids to school assuming that when the graduate, they will be prepared for what comes next. Some kids will enter the work force right out of high school, others will go to trade school or junior college, and some will enroll in a four year college or university. But parents want to know our children are ready for the next step in their journey.

Several years ago, ACT devised a “benchmark” score that was considered predictive of success in college or career for each of the four subject areas on the test: English, reading, math, and science. Failing to meet the benchmarks does not mean a student can’t be successful in college or career, but it makes the journey more challenging and often necessitates remedial coursework.

ACT’s Career (job training) and College Readiness (CCR) benchmark is the accurate indicator of what a student will be able to do after high school. It means that a student with a regular high school diploma is prepared to be trained for a job, or has a 75% probability to finish the first year of college or technical school with a C average. This is not college completion readiness. It is a basic, fundamental benchmark to be employable today. Those who do not qualify, according to ACT CCR, are minimum wage material with increasing unemployment during their working life.

Nationally 26% of students who take the ACT meet the CCR benchmarks in all four areas. Put another way, not counting high school dropouts, 74% of students nationwide with a regular high school diploma are not even ready to be trained for a job or finish the first year of any college or technical school according to ACT. That number has remained unchanged since 2012, when the CCR benchmarks were initiated.

Tennessee results are even worse, although the percentage of students meeting all four benchmarks has risen from 16% in 2012 to 19% in 2014.  Nationally 5% of black students are prepared for college or career; that number is 3% in Tennessee.

It is obvious that the achievement gap is alive and well in Knox County. And overall, 77% of Knox County graduates are still not college and career ready, according to the 2014 ACT CCR benchmarks.

Even the statistic that 23% of Knox County students meet all four benchmarks is misleading. Remember, 11.3% of Knox County students don’t graduate. According to ACT’s 2014 READINESS REPORT for the Knox County school district, only 23% of the graduates with a regular diploma, or only 23% of the 88.7% who graduated are college and career ready. That means that only 19.6% of those who entered 9th grade are ready four years later for job training or to have a 75% chance to finish the first year of a college or tech school only.

Put another way, 80.4% (100% – 19.6%) are not ready to be trained for a job or to have a chance to finish even the first year of a college or tech school without additional remedial training. Remember this the next time you hear Dr. McIntyre brag about Knox County Schools’ A+ in Achievement.