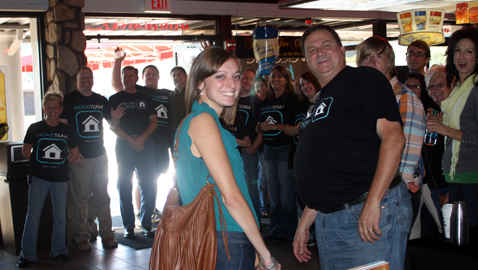 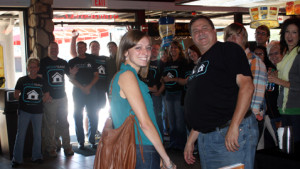 The congregation of A Church Called Home meets every Sunday at Halls Cinema 7.

By Tasha Mahurin
mahurint@knoxfocus.com
“Kindness has won more people to the faith than stadium events and million dollar productions.” Those were the words of Jason Creech, Pastor of A Church Called Home.
The church hosted its first service in the Halls Cinema on September 9 with 118 people in attendance. Although a new church in the community, the leadership of A Church Called Home wasted no time in their mission to demonstrate the love of Christ in tangible and creative ways. This past Friday the church purchased all the tickets for the 6:35 showing of Disney’s new movie “Wreck It Ralph” at Halls Cinema.
“The church exists to serve and love our city and the people within it; to show the love of Christ in real and practical ways.  Maybe outsiders would be insiders if we were just a little kinder.  So, with that in mind we decided to treat the families in our community to a free movie,” explained Creech.
Creech and his team did just that by treating 85 movie-goers to a free showing of the highly anticipated Disney film.
“It was great watching people approach the ticket office to make their purchase only to hear someone say, ‘Your tickets have been paid for by A Church Called Home.’  That’s a win for us!  I refuse to be labeled as ‘after people’s money.’ Instead, we will give.  God gave – He his only Son.  Someone once said, ‘The only time Jesus ever passed the basket, He was giving not receiving,’”   Creech added.
Creech came to the Christian faith at the age of 19. He has 14 years of pastoral experience, serving on staff at four churches in the area of student ministries. Jason is the founder of Mirror-Mirror Inc., a nonprofit that hosts events in public schools throughout Kentucky and abroad, speaking to over 63,000 students. Mirror-Mirror partners with businesses and colleges to equip young people for success.  Because of faithful sponsors, the organization has given over $4 million in college scholarships, awarded students with over $11,000 in new clothing, and granted one hard working student a new car.
Jason is also the author of the following books: New.U, Dealing With the S-Words, and Navigate. He and his wife Melissa were married in 1996 and moved to Knoxville earlier this year to plant A Church Called Home.  They have two children, Tori and Chaz.
When asked why plant a new church in Knoxville? Creech responded: “According to the americanchurch.org, 80% of the Knoxville population does not attend church. I think the real question should be, ‘Why not another church?’  We live in a time of much instability and fear. Every night the evening news reveals how far we’ve strayed from what God has called us to be.  The Church plants herself in the midst of it all, and represents the strength and security of Someone greater!  She is a lighthouse of hope and a welcoming home to all who will come.”
A Church Called Home meets every Sunday morning in Halls Cinema 7 at 10:45.  To find out more information visit their website at www.churchcalledhome.com.  You may also call the church office by calling 865-643-8900.