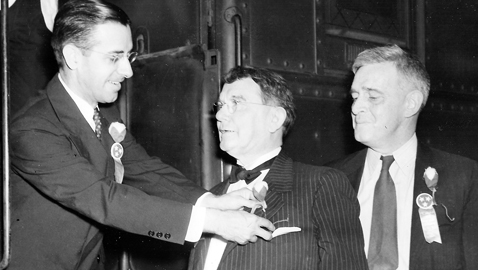 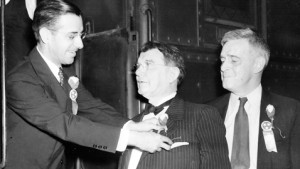 Many have long misunderstood U. S. Senator Kenneth McKellar and his complex relations with the Tennessee Valley Authority; in fact, some still perceive McKellar to have been an opponent of the TVA.  The fact is the TVA proved to be so popular in Tennessee no elected official could have been legitimately hostile to the Tennessee Valley Authority and survived long.  It had been McKellar, while a Congressman, who had introduced the bill to allow the government to build a dam and nitrate facility at Muscle Shoals, Alabama.  This particular project was under the auspices of the military and while McKellar’s legislation did not specify a location, he did urge President Woodrow Wilson to build the nitrate plant at Muscle Shoals.  McKellar wanted a location in or near Tennessee, as he believed farmers would benefit by being able to purchase any surplus nitrogen for fertilizer.

What to do with the Muscle Shoals facility became the subject of intense debate between the proponents of public and private power interests following World War I.  Senator McKellar supported legislation endorsed by various farm organizations, but the bill approved by the Senate never made it out of a House committee.  Industrialist Henry Ford, father of the Ford Motor Company, expressed an interest in bidding on the Muscle Shoals plant; Nebraska U. S. Senator George W. Norris introduced a bill to have the facility operated by the government and the two competing interests fought for much of the 1920s.

Senator McKellar preferred the Ford proposal, as it would continue to produce fertilizer for farmers, while the Norris bill did not have a fertilizer component.    McKellar changed his mind and announced he would support the Nebraskan’s bill in late 1924, a position unpopular with many of his Southern colleagues.  McKellar bitterly denounced a bill sponsored by Alabama U. S. Senator Oscar W. Underwood that would have allowed the private power companies to operate the Muscle Shoals facility and the newly constructed dam for fifty years.  Senator McKellar had come to believe the Ford proposal and Underwood’s bill would deny consumers a source of cheap public power.  Senator Norris had also won McKellar’s support for his legislation after including a provision, which allowed for the production of fertilizer, which helped farmers, one of the Tennessean’s chief concerns.  Unlike many of his colleagues, K. D. McKellar was less concerned about private power versus public power; McKellar’s primary interest was which proposal did the most for the people of Tennessee.  Even though George W. Norris had addressed the production of fertilizer in his bill, the Nebraskan remained far less concerned about producing fertilizer than many Southerners.

Before being elected to Congress, McKellar had been a prosperous attorney in Memphis and had represented a private power company.  McKellar helped the company to organize and was given, as his fee, $30,000 of stock in the company.  For the time, it was a princely sum, yet the company changed hands several times and eventually the stock owned by McKellar was worthless.  Senator McKellar, with his long memory, never forgot the experience and was surprisingly not especially friendly to the private power concerns while in Congress.

McKellar’s long-time political partner and ally, E. H. Crump, leader of the Shelby County political organization, was even more hostile to private power interests.  Crump blamed the private power companies for helping to remove him from office as Mayor of Memphis.

Naturally, both McKellar and Crump believed with the advent of public power companies, farmers could purchase needed fertilizer cheaply while consumers would get electricity for far less than what the private power companies were charging.  Still, McKellar was not willing to accept any legislation that brought about public power if any bill did not serve the best interests of the people of Tennessee.  Senator McKellar fought a bill sponsored again by George W. Norris for the Tennessee Valley development as Norris again did not consider the production of fertilizer and worse, from McKellar’s point of view, the bill did not compensate Tennessee for any loss of tax revenue or water power.  McKellar filibustered against the bill and it died in the Senate.

A bill finally emerged from Congress in 1928, which was promptly vetoed by President Calvin Coolidge.  Senator Norris decided if he were to be successful again, he would have to satisfy McKellar’s concerns about compensating states for lost tax revenue.  For his part, McKellar agreed to compromise with the Nebraska solon in supporting a bill which did not stress production of fertilizer, but encouraged research for fertilizer production.

Conservative Republicans were all for selling the Muscle Shoals plant to the private power companies and were steadfastly opposed by a coalition of Southern Democrats and Progressive Republicans.  Presidents Coolidge and Herbert Hoover both vetoed efforts by the coalition to pass legislation for public power.  McKellar disliked Hoover intensely and Hoover’s veto did nothing to endear the icy chief executive to the disappointed Tennessean.

Senator McKellar was deeply disappointed when President Roosevelt selected George W. Norris to introduce the TVA legislation in Congress, but McKellar publicly praised his colleague’s long fight for public power.  McKellar fought hard for the construction of the Cove Creek Dam in Tennessee, as well as the Wheeler Dam built in Alabama as part of the Tennessee Valley Authority.  The three member Board of Directors of the TVA were more conservative in their projections for the agency as they hesitated in building more dams, while Senator McKellar insisted upon the construction of at least five additional dams along the Tennessee River.  The Chairman of the TVA, Dr. Arthur E. Morgan, seemed perfectly content not to directly compete with the private power companies, but McKellar pushed through the appropriations needed for the construction of the additional dams.

It was during one of the many legislative battles on behalf of the Tennessee Valley Authority that someone introduced the term “McKellarism”, which was used to describe large appropriations and the many jobs and public projects created by the vast sums of money expended. Senator McKellar was not horrified by the gibe and replied in what was, in essence, his political credo in serving the people of Tennessee in the United States Senate.

“If loyalty to my friends,” McKellar said, “and showing appreciation of their friendship, if seeing that my state receives its portion of public favors so that our people may progress and advance with other sections is “McKellarism”, as has been charged, I gladly meet the issue.

And so he did.

Many Republican members of Congress remained hostile to the Tennessee Valley Authority and two powerful GOP legislators made a determined effort to pare TVA’s appropriations from $40 million to $30 million in 1940.  Senator McKellar quickly crushed the Republican rebellion in the Senate.  Not only did McKellar beat the Republicans back, but also he successfully obtained even more money for the TVA to build a dam and steam plant on the Holston River.

Throughout his entire career in the United States Senate, Kenneth McKellar continuously fought for the Tennessee Valley Authority.  It was the seventy-nine year old McKellar who led other senators in moving to appropriate $4 million to begin construction of yet another steam plant in 1948 when the Senate was controlled by a Republican majority.  In his last year in the Senate and then eighty-three years old, McKellar remained on the Senate floor until the wee hours of the morning to restore more than $14 million in funds that had been slashed from the Tennessee Valley Authority’s appropriations.

Despite McKellar’s indefatigable and constant efforts on behalf of the TVA, his opposition to Douglas Dam is frequently better remembered, as is his continuing feud with David Lilienthal.  McKellar’s opposition to the Douglas Dam was largely due to the fact thousands of East Tennesseans were opposed to the dam.  Citizens and business interests were concerned about 30,000 acres of prime farm land being flooded, lost tax revenue and possibly the extinction of the city of Dandridge, while workers were concerned about being unemployed.  President Roosevelt supported the dam as necessary to the war effort, but Senator McKellar doubted the dam would be completed in time to do much of anything to promote America’s interests during World War II.  Still, McKellar dropped his opposition after a public plea from FDR and sought the money necessary to build the dam.

Besides regularly getting the dollars to build dams throughout the Tennessee Valley, McKellar helped TVA purchase property owned by private power companies.  Dr. Morgan, then Chairman of the TVA, was content to allow private power companies their monopolies in more heavily populated urban areas, leaving the TVA to furnish public power to residents in more rural areas.  McKellar strongly objected to Dr. Morgan’s notion and insisted TVA have the right to furnish cheaper public power all across Tennessee.  McKellar considered Dr. Morgan’s vision to be nothing less than a failure of the entire concept of the Tennessee Valley Authority.

Senator McKellar also led the fight against moving the headquarters of the Tennessee Valley Authority elsewhere.  There were persistent efforts to relocate the TVA headquarters, especially by Alabama’s U. S. senators.  McKellar remained absolutely opposed to relocating the TVA or any other Federal installation from Tennessee and his power inside the United States Senate helped to protect the Volunteer State.

When Senator McKellar’s record regarding the Tennessee Valley came under attack, McKellar produced a letter signed by every member of the Senate Appropriations Committee attesting to his effectiveness in keeping the agency alive and fully funded.  Without Kenneth McKellar, his power inside the Senate, the Tennessee Valley Authority would certainly not have prospered as it did.  McKellar was instrumental in making the TVA successful, as well as bringing the atomic energy project to Oak Ridge.  Knoxville would be a very different place to live today without both of those entities.