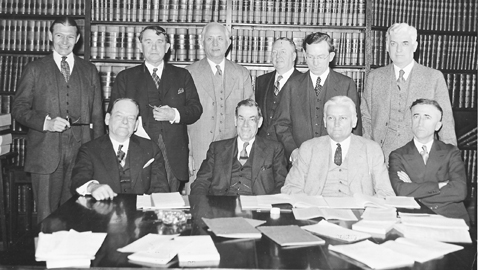 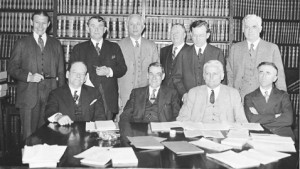 Senator Kenneth McKellar (standing, second from left) with fellow members of the Congressional Economy Committee in 1931.

Republicans had done well in Tennessee during the decade of the 1920s in Tennessee. The zenith of Republican success was 1920 when Warren Harding had carried the state; the GOP had elected a governor, and won five out of ten Congressional seats. That success was to be short-lived; Democrats won back the governorship in 1922 as well as eight of the ten Congressional seats. In 1924, Calvin Coolidge failed to carry Tennessee, which was won by John W. Davis, the Democratic presidential nominee. Governor Austin Peay, who had proven to be a remarkably effective executive, was reelected to a second term, and senior United States Senator John Knight Shields was seeking a third term.

Shields, a former Justice of the Tennessee State Supreme Court, had not been as enthused about Woodrow Wilson as had been his junior colleague, Kenneth McKellar. In fact, Wilson had contemplated rebuking Shields when the senator was running for reelection in 1918 and only the intervention of McKellar had kept the President from telling Tennesseans of his low regard for the senior senator. Senator McKellar had been profoundly embarrassed when Shields, once safely reelected, had said President Wilson could go straight to Hell. Shields had continued to be less than supportive of both Wilson and Wilson’s cherished League of Nations.

Yet what Woodrow Wilson failed to do in 1918, he accomplished in 1924 from the grave. Wilson, a frequently unforgiving and vindictive man, had written a letter in response to an inquiry about John Knight Shields from a Tennessean. The former president, although a spent force both physically and politically, quite ill and partially paralyzed from the effects of a major stroke, could still pick up a pen and sign his name. Wilson signed his name to a brief letter stating Senator Shields had been no friend to him or his administration. Wilson was still very popular with Tennessee Democrats and Wilson’s letter, written in 1923, had its intended effect. Shields was challenged in the Democratic primary by two other East Tennesseans; Lawrence D. Tyson, was a former Speaker of the Tennessee House of Representatives and an esteemed general. Tyson had fought in World War I and was the owner of the Knoxville Sentinel. Chattanoogan Nathan L. Bachman, like Shields, had been a Justice of the Tennessee Supreme Court. The wealthy Tyson ran a lavish campaign and defeated Shields, making Kenneth McKellar Tennessee’s senior U. S. Senator, a position he was to hold for the next twenty-eight years.

In 1928, McKellar was seeking his third term in the Senate. His personal popularity was quite high and perhaps the greatest threat to his continued incumbency was gone. Governor Austin Peay had been reelected to a third consecutive two-year term in 1926, defeating State Treasurer Hill McAlister. McKellar was very proud to be the senator from Tennessee and he jealously guarded both his position and prerogatives. E. H. Crump, leader of the Shelby County machine was uneasy, thinking Peay had his eye on McKellar’s seat in the United States Senate. It was a thought that had at least crossed McKellar’s mind once or twice, but the popular governor had narrowly managed to win a third term and died the following October unexpectedly.

Henry Horton, the Speaker of the State Senate, had succeeded Peay as governor and the McKellar – Crump political organization was opposed to his election. Governor Horton was strongly under the influence of former U. S. Senator Luke Lea, who had been defeated by McKellar in 1915. Lea was an accomplished politician and Governor Horton had little in the way of scruples about using state resources for political purposes. By 1928, Lea’s publishing empire included three daily newspapers in Tennessee’s three largest cities; Lea owned the Nashville Tennessean, the Memphis Press Scimitar, and the Knoxville News-Sentinel, giving him a powerful voice in Tennessee politics. Lea knew both Senator McKellar and Crump intended to strongly oppose Henry Horton’s reelection as governor and Lea shrewdly encouraged an opponent for McKellar in the Democratic primary to divide the resources of his rivals.

Congressman Finis Garrett had been himself a newspaperman, lawyer and teacher before being chosen as the Clerk and Master of the Chancery Court in Weakley County. Garrett had been first elected to Congress in 1904 when he was only twenty-nine years old. Garrett was very highly regarded and had been reelected eleven times by his constituents. Finis Garrett was apparently equally well regarded by his colleagues in the U. S. House of Representatives, as he was elected the Minority Leader of the House in 1923. Garrett was still Minority Leader when he announced his intention to challenge Kenneth McKellar in the 1928 senatorial primary. Garrett had to give up his seat in Congress to run against McKellar and it is interesting to consider had he chosen to remain in the House for another four years, he would almost certainly have become Speaker.

Congressman Garrett and Senator McKellar, aside from both being Democrats, were polar opposites in their political beliefs. Garrett was profoundly conservative, while McKellar was thought to be quite liberal. Garrett had strongly opposed the adoption of the Nineteenth Amendment, giving women the right to vote, a cause Senator McKellar strongly advocated. McKellar was friendly to organized labor and had supported the enactment of child labor laws and an eight-hour workday for female employees.

Congressman Garrett’s campaign was well funded and he launched a determined effort to dislodge McKellar from his perch in the United States Senate.

McKellar proved to be very hard to beat. His attention to detail, his famed constituent service, and his alliance with East Tennessee Republicans made him a difficult target, even for so formidable an opponent as Finis Garrett. McKellar’s personal popularity was demonstrated in Congressman Garrett’s own backyard, as the senator carried four of the eight counties comprising Garrett’s own Congressional district. Statewide McKellar beat Garrett almost two-to-one.

Tennessee Republicans, hopeful with Herbert Hoover running at the top of the ticket, had nominated a presentable challenger to McKellar in the general election in the person of James A. Fowler. Fowler was a former Assistant Attorney General of the United States and a one-time Mayor of Knoxville. McKellar paid little attention to his own reelection campaign, but stumped Tennessee on behalf of Democratic presidential nominee and New York Governor Al Smith. McKellar spoke to frequently huge crowds, urging them to support the Catholic governor. McKellar, though pleased at having been easily reelected, was bitterly disappointed when Al Smith lost Protestant Tennessee to Herbert Hoover.

With his reelection in 1928, McKellar was gaining seniority and importance in the Senate. Being the loyal Democrat he was, McKellar accepted speaking assignments in other parts of the country. McKellar was campaigning in Oklahoma in 1930 for the Democratic ticket when the automobile in which he was riding hit another vehicle near Lawton and turned over. Senator McKellar, suffering facial lacerations and three broken ribs, cancelled the rest of his tour and returned to Washington to recover.

Just seven months after Hoover had taken the oath of office as President of the United States, the stock market collapsed. The onset of the Great Depression crippled the Hoover presidency and he became almost a pitiable figure in the isolation of the White House. Tales of suffering during the Great Depression lingered and Hoover was blamed for his inability to get the economy moving again. President Hoover was reviled and widely despised by many of his fellow countrymen.

Ohio Congressman Stephen M. Young wrote many years later in his memoirs about being haunted by a report of a young boy whose pet rabbit had been eaten by the boy’s starving family. The boy was so upset about the loss of his pet that he hung himself.

People who lost their homes and were reduced to living in cardboard shanties – – – and entire villages of the flimsy structures sprung up – – – were promptly christened “Hoovervilles” after the beleaguered President Hoover.

Just as the administration of Herbert Hoover was incapacitated by the effects of the Great Depression, so was that of Tennessee Governor Henry Horton. Horton was virtually inexperienced in political affairs, having been elected Speaker of the State Senate during his first term in office. Governor Horton’s administration was so heavily influenced by Luke Lea, many referred to Lea as governor in all but name. Horton’s ability to lead all but evaporated with the fall of the banking empire of Caldwell and Company literally days after Horton had been reelected.

With the revelation the State of Tennessee had lost almost seven million dollars of taxpayer funds deposited with Caldwell and Company, Tennesseans were livid. Rogers Caldwell was a close associate and business partner of Colonel Luke Lea. Governor Horton’s relationship to Lea was so close that when U. S. Senator Lawrence D. Tyson died in office in 1929, Horton actually appointed Lea to fill the vacancy. Lea, his influence in Tennessee, already immense, majestically turned down the appointment, preferring to run his newspaper empire, oversee his various business interests, and run the state government through Henry Horton.

It was a mistake that would change the face of Tennessee politics and bring Luke Lea untold grief and misery.