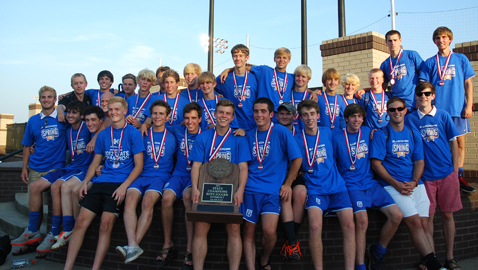 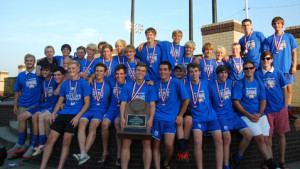 If an award were given to the Knox County high school which had the most success in TSSAA Division I competition in 2011-12, it would be hard to argue against Christian Academy of Knoxville receiving the honor.

Beginning with a state championship in girls soccer at Chattanooga in early November and ending with a state boys soccer title at the Spring Fling in Murfreesboro during the last week of May, CAK enjoyed a super school year in athletics.

Soccer wasn’t the only sport Christian Academy found gold, either. The Warriors’ football team rolled past Milan 49-14 in the Class 3A finals at the Blue Cross Bowl in Cookeville in early December.

Those three state crowns were the highlights, but there were other strong showings on the state level for CAK, which is located at 529 Academy Way, just off Dutchtown Road in West Knoxville.

The TSSAA also has state championship competition in cheerleading and the CAK squad placed third in the Medium Varsity Division.

The Lady Warriors’ track team, with only five competitors at the state level, racked up 43 points to place fourth out of 45 teams in Class A-AA.

CAK’s softball and baseball teams also advanced to the state in Class AA, with the Lady Warriors notching one victory in Murfreesboro before being eliminated.

“Our teams have been blessed this year with great success,” said athletics director Steve Denny. “It comes with a lot of hard work and commitment from the athletes and coaches.

“That success goes beyond the scoreboard,” added Denny. “They’ve done a tremendous job in the community with service projects and reaching out to others. I’m very proud of what our program has done in and out of competition.”

More good news came out of CAK last week when wide receiver Josh Smith joined teammate and lineman Brett Kendrick as UT football commitments. Both will be seniors this fall at CAK, along with state record-setting quarterback Charlie High, who also is being recruited by the Vols.

In all, Knox County schools captured 10 TSSAA state championships in team competition this past school year.