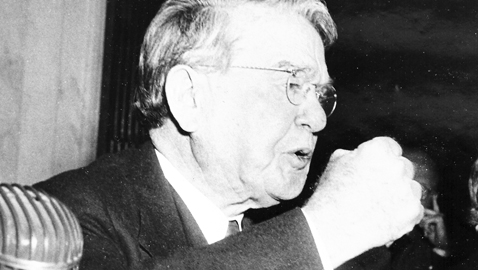 By Ray Hill
Francis Biddle was attorney general of the United States under President Franklin D. Roosevelt. He noted Tennessee’s Senator Kenneth D. McKellar could be “obstinate” and “vindictive,” but was careful to note McKellar was “shrewd.” Biddle also added that McKellar “never forgot.” It was McKellar’s long memory that caused The Tennessean to bedevil the director of the Federal Bureau of Investigation, J. Edgar Hoover.

The Democrats came back to power in 1933 with the inauguration of Franklin Roosevelt after twelve long years of Republican rule. McKellar’s office was inundated with requests from thousands of Tennesseans looking for work. Senator McKellar kept an eye out for his constituents with every federal agency and McKellar contacted Hoover about the desire of a few Tennesseans who wished to become special agents for the FBI. The imperious director ignored McKellar, causing the senator to go over his head and contact Hoover’s nominal boss, the attorney general. When Hoover found out about McKellar complaining to the attorney general, he retaliated by firing three FBI special agents in Tennessee not a week later.

Considering that Kenneth McKellar was the ranking member of the Senate’s powerful Appropriations Committee, Hoover’s act of vengeance was both arrogant and foolish. McKellar was also the chairman of the Appropriation Committee’s Justice subcommittee, which oversaw Hoover’s own budget. McKellar had been in the Senate since 1917 and was one of the more senior Democrats in that body. Profoundly angered by Hoover’s insult, McKellar waited for the FBI director to come to Congress, as he must, for funds.

The confrontation between Senator McKellar and J. Edgar Hoover has been well documented and has even been recognized in modern film. The Tennessean managed to mortally embarrass the ultra-sensitive Hoover so badly it chaffed the FBI director for decades to come. Both “Dillinger” with Johnny Depp and the remarkable “J. Edgar,” a film by Clint Eastwood, have scenes with Senator McKellar clashing with Hoover. Oddly, both actors chosen to portray Senator McKellar have mustaches, an affectation McKellar never wore on his lip.

Congress had previously passed a slew of crime bills but had not included enough money to cover the cost of implementation. J. Edgar Hoover came to Capitol Hill to ask for quite nearly twice his earlier budget appropriation. Waiting for him was Tennessee’s senior United States Senator.

Armed with an array of graphs, charts and statistics, Hoover doubtless felt well prepared for the questioning to come from the Senate Appropriations Committee members. Hoover proudly rattled off his statistics; bank robberies, which had been almost commonplace earlier, were significantly down. Kidnappings (the most famous of which was perhaps the abduction of the infant son of famed aviator Charles Lindberg) had been reduced. “Ma” Barker was dead, as were “Baby Face” Nelson and John Dillinger.

Senator McKellar began his questioning of Hoover after the director finished his presentation outlining the FBI’s need for more money.

McKellar rather innocuously wondered if the FBI used any of its budget on advertising and the director replied it did not. Senator McKellar noted the number of movies being released by Hollywood depicting the workings of the FBI, which he claimed widely advertised the agency and its methods. During the 1930s there were a plethora of movie studios and modern-day readers will remember, television was years away from becoming a popular form of entertainment. At that time, the primary forms of entertainment for Americans was either the movies or radio. Fortunately for Hoover, Senator McKellar did not probe into the agency’s ties to some radio programs, as the producer of one such program proudly boasted the stories were lifted directly from the FBI’s own files. Hoover said the FBI objected to much of the material used by the Hollywood studios as it related to the agency and had duly registered its protests.

What Hoover did not mention to the subcommittee members was he was keenly aware of the power of modern media and how it affected the FBI’s reputation and effectiveness. Hoover had even entertained the notion of the FBI making its own movies for public consumption.

McKellar asked Hoover if the FBI employed any professional writers, which the director denied. The two continued to verbally spar throughout the hearing and McKellar infuriated Director Hoover by pointing out the FBI had on more than one occasion claimed credit for arrests made by other law enforcement agencies. Senator McKellar told the red-faced Hoover, “It seems to me that your department is just running wild, Mr. Hoover.” McKellar went on to say he considered Hoover’s request for more money “extravagant.”

The angry Hoover interjected, “Will you let me make a statement?”

Senator McKellar snapped, “I think that is the statement.”

One sympathetic senator tried to help Hoover during the course of the hearing. Missouri’s Harry Truman tried to steer the conversation away from McKellar’s pointed questioning. Ironically, Truman would later come to dislike J. Edgar Hoover intensely.

Comfortable with his well-prepared statistics, Hoover fielded Senator Truman’s questions easily. Positively relentless when provoked, McKellar was not done and was soon again on the attack. The Tennessean wanted to know, “How many people have been killed by your department since you have been allowed to have guns?”

Senator McKellar snorted, “In other words, the net effect of turning guns over to your department has been the killing of eight desperadoes and four G-men.”

Hoover tried to stress FBI agents were under the strictest of orders to make every effort to take any suspect alive. The FBI director explained agents were only to use their weapons in self-defense or if absolutely necessary.

Senator McKellar dismissed Hoover’s statement, saying, “I doubt very much whether you ought to have a law that permits you to go around the country armed as an army would, and shoot down all the people you suspect of being criminals, or such that you suspect of having guns, and having your own men shot down.”

McKellar went on to tell the enraged and astonished FBI director that it was not his fault the statutes enabling FBI agents to shoot down an unsuspecting populace were on the law books; rather it was the fault of the Congress who had enacted the laws. McKellar told Hoover even if a man was a murderer, the FBI agents did not have the right to kill him, causing the FBI director to cry, “Even if he pulls a gun on you?”

Senator McKellar serenely replied that was a matter for the courts. Senator Truman wanted to know just how McKellar would catch them “If they commenced shooting at you?” The Tennessean was forced to reluctantly concede there might be instances where it was necessary for the FBI agents to use their weapons.

McKellar went on with his questioning, quietly asking Hoover what his qualifications were to serve as Director of the FBI. Hoover replied he had been employed by the Department of Justice for nineteen years and had been the FBI Director for twelve years. Senator McKellar retorted he meant had Hoover attended any sort of “crime school”? Hoover, starting to squirm, mentioned he had initiated just such a training program inside the FBI, causing Senator McKellar to scathingly say, “So whatever you know about it you learned there in the Department?”

Hoover replied that was true and described it as a “first-hand” experience.

It was then that Senator McKellar asked the question that was to eat at Hoover until his death in 1972.

“Did you ever make an arrest?” McKellar wondered.

Hoover weakly replied he had.

Senator McKellar refused to allow Hoover to wriggle off the hook, persisting by asking, “How many arrests have you made and who were they?”

J. Edgar Hoover answered the question by citing his investigations in a few cases, but Senator McKellar demanded, “Did you make the arrests?” Hoover said the arrests were made by officers who were “under my supervision”.

Senator McKellar thundered, “I am talking about the actual arrests.” Pressing his point, McKellar asked, “You never arrested them actually?”

Hoover lamely mentioned the FBI had not even had the authority to make arrests until two years before the 1936 hearing. Yet it did not erase the public perception that came from the hearing; the famed Director of the Federal Bureau of Investigation, the top “G-Man” in the country had never even made a single arrest in his career.

It was a devastating admission for Hoover to make and one that made him appear at least vaguely cowardly. Years later, Hoover would confess McKellar’s forced admission had felt as if his manhood had been questioned. Following his confrontation with Senator McKellar, the outraged Director gave instructions to be notified the moment agents located the whereabouts of notorious bank robber and criminal Alvin Karpis.

When told that Karpis had been found in New Orleans, Hoover chartered a plane to fly him to the Big Easy where he personally arrested Karpis.

McKellar pressed the Senate to reduce the appropriation for the FBI, but the full Senate disagreed and gave Hoover the amount he had requested.

Not surprisingly, relations between Senator McKellar and J. Edgar Hoover would remain “strained” for years to come. There is some reason to believe the smoldering Hoover ordered agents to follow the senator for months after the hearing. Still, McKellar continued to be reelected by the people of Tennessee and as his seniority inside the Senate grew, so did his power. Hoover, no fool, recognized McKellar’s power and attempted to mollify the senator. By 1943, relations between the two men were cordial enough that Hoover invited Senator McKellar to make a speech during the FBI’s Academy graduation ceremony. McKellar responded by praising the FBI Director as “a grand man.”

While both men likely understood the power and usefulness of the other, it was Kenneth D. McKellar who dealt J. Edgar Hoover the most embarrassing episode in his long career, an embarrassment Hoover himself never forgot nor truly ever forgave.