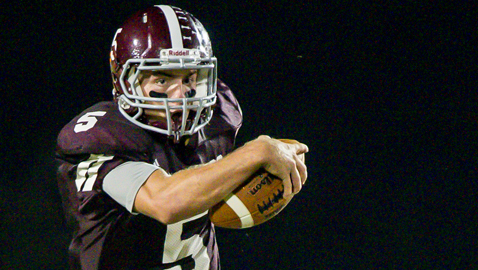 Photo by Hobe Brunson
Quarterback Nicky Frizen, Bearden High School’s Male Athlete of the Year for 2012-13, led the Bulldogs to an 8-2 regular season record and a berth in the state playoffs last season. He will continue his football career at the University of the Cumberlands.

Nicky Frizen wasn’t that tall as a quarterback at Bearden High School last season, but he was looked up to by teammates.

“He definitely was the leader of our football team,” said head coach Brad Taylor of the Bulldogs’ 5-10, 190-pound field general.

“The best way to describe Nicky is with a story. I had a talk with Bill Young, my high school coach,  prior to last season. Looking back on his career, Coach Young recalled, ‘We had our better teams, if our hardest workers were our best players.”

Frizen was just that, a hard worker and one of the squad’s best players, and he inspired others as well. The results were one of Bearden’s better teams.

Nicky’s leadership qualities were felt throughout the campus. In addition to being captain of the football team, he had a 3.70 grade point average and a 28 on the ACT and served on the leadership committee of the Fellowship of Christian Athletes. His popularity among classmates led to him being crowned Senior Prom King.

As Andre Caballero, the Bulldogs’ offensive coordinator, summed up, “He was a true inspiration and made an incredible impact academically, athletically, spiritually and socially at BHS.”

Bearden selected Frizen its Male Athlete of the Year. His most satisfying memory of it?

“Probably beating Farragut in three overtimes, and the fact I got to do it with some of my best friends,” he answered.

The Bulldogs went on to post an 8-2 record before stumbling 35-7 at Kingsport Dobyns-Bennett in the first round of the Class 6A playoffs.

“We turned the ball over twice in their end zone in the first quarter,” said Frizen. “We had the ball punched out at the end of a long run, and I threw an interception from inside their 5 or 10-yardline. It put us behind the 8-ball. It’s hard coming back from that, but they were a good team though.”

“It was a lot of fun, and we probably played them about as well as anybody,” he said. “It was 7-3 going into the fourth quarter. We had some long drives that stalled out. They ended up winning 21-3 with a couple of late touchdowns.”

For the season, Frizen, who was named the team’s MVP and All-District 4-AAA, passed for 1,796 yards and 16 touchdowns and completed 62 percent of his aerials. He also ran for 182 yards and three TDs.

Frizen played basketball as a freshman and was a “defensive” catcher his freshman and junior years, helping Coach Jack Tate’s baseball team reach the state finals in 2012. He chose not to play baseball as a sophomore, instead focusing on spring football practice as the team’s new No. 1 QB. He played baseball again the next spring “after realizing how much I missed it.”

This past spring, Frizen chose “another sport (boxing) to compete in to stay in shape” for his upcoming freshman season of college football at the University of the Cumberlands. He trained and won his first-ever bout in the East Tennessee Golden Gloves tournament at Chilhowee Park, and came away with a true appreciation for the grueling sport.

Frizen has already made three trips to Williamsburg, Ky., to work out with his new football team, and this past weekend he also attended freshmen orientation. He officially reports for the start of the season Aug. 12.

With the University of the Cumberlands being a Baptist school, Frizen said he is considering a double major in Missions and pre-Engineering.