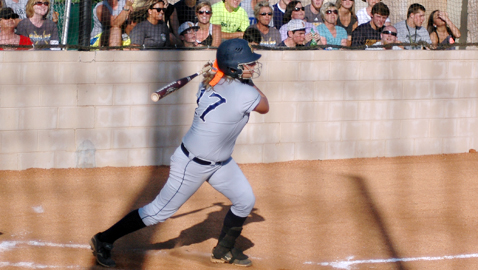 Carly Lewis is known mostly for her outstanding pitching, but she also hit .429 with four homers and 36 runs-batted-in for the 41-8 Lady Eagles this season.

For Seymour High School’s softball team, the third time at the state tournament was not the charm. The 2013 season did not have a storybook ending.

But it wasn’t because of a lack of effort, particularly from its ace pitcher, senior Carly Lewis.

“I did as best as I could,” said Lewis, looking back on a 1-0 loss to Munford and a 2-0 loss to Murfreesboro Riverdale in Class AAA action. “I kept them down. There was not much more that I could’ve done.”

Coming into the state, Lewis had hurled 31 of Seymour’s 41 victories.

The talented right-hander gave up a solo homer in the state opener and allowed only two hits in the second outing.

“We didn’t hit very well at the state, including me,” added Lewis, who had hit over .400 during the season batting out of the No. 4 hole.

Then there was the youth factor. Five freshmen were starters for Coach Dayna Carter’s squad.

“I don’t think they were used to the experience,” pointed out the veteran Lewis. “It’s a whole different experience at the state.

“It can be intimidating. You can get caught up in it very easily. The fans are so much louder. The atmosphere is so much greater.”

The intense conditions, said Lewis, make it tougher to relax and play like usual.

Despite the Lady Eagles’ second straight two-and-out exit at the state, Lewis looks back on her high school athletics career with pride. What is she proud of the most?

“How much the team has accomplished in the past four years and how much we have improved,” answered Lewis, Seymour’s Female Athlete of the Year for 2012-13.

In Lewis’ sophomore season, the Lady Eagles reached the state tourney for the first time in school history. Seymour’s record over the past three seasons: 120-26.

As a junior, Lewis alternated with Celeste Whaley as Seymour’s starting pitcher.

Lewis was the IMAC Player of the Year in District 2-AAA this season, finishing with a 31-6 record in the circle, including seven no-hitters and three perfect games. She had a 0.47 ERA and struck out 312 in 208 innings. Offensively, she batted .429, with four homers and 36 RBI.

Lewis has signed with Georgia College, a NCAA Division II school and member of the Peach Belt Conference. The Bobcats were 37-17 this past season, tying for second in the 12-team conference.

Growing up as a youngster in the West Palm Beach area of southern Florida, Carly played soccer, flag football and took gymnastics, “but softball was the only one I stuck with . . . and I loved to play.”

She was 6 years old when she first started playing the game, and it was fast-pitch, although the coach-pitch variety.

“The coach I had my first year really worked with me and so did my dad (Ed Lewis),” recalled Carly, who moved to Seymour when she was 11. “Dad coached a couple of my teams throughout the years.

“Once I got into high school, he mostly worked with me one on one.”

Lewis has had three different pitching coaches, including Carter, who pitched at the University of Oklahoma and was pitching coach at UT before becoming Seymour’s coach in 2002. Brandon Carr has been Lewis’ pitching coach the past two years.

Lewis is pitching for the Knoxville Lady Eagles, an ASA 18 “A” team, this summer. Two major tournaments coming up before she reports to Georgia College August 15 will be the ASA state at Hendersonville and the ASA nationals at Salem, Va.

Carly “fell in love with the school” when she visited Georgia College, which is located in Milledgeville, Ga., said her father, “and she really liked its academic program.”

Lewis, who also was recruited by Tusculum College, plans to major in exercise science.

Even though she has thrown her final pitch at Seymour High, Carly will continue to follow the Lady Eagles with interest.