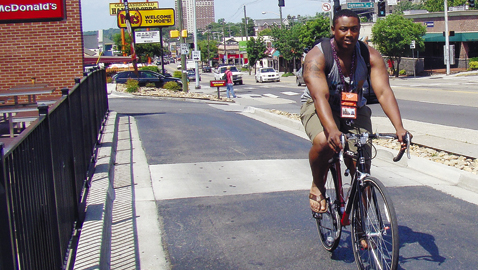 Photo by Steve Williams.
Dennis Troutman bought a new bicycle recently, which he is using to get around to summer school classes at UT-Knoxville. He’ll be taking it with him when he starts attending UT-Chattanooga this fall. Troutman said he also enjoys riding on the Riverside greenway trails in East Knoxville, Bicycling is just another extension of the Austin-East High graduate’s athletic versatility.

Dennis Troutman’s athletic resume was so impressive this past school year, Austin-East High School changed tradition and named him its overall Athlete of the Year, said athletic director Alvin Armstead. In past years, A-E has selected both male and female athletes of the year.

Troutman lettered in five sports, which is almost unheard of in this day and age of the specialized athlete.

Being at a smaller school, enrollment-wise, in Knox County contributed to his feat. Like he said, “everybody at the school does something,” from those who played chess to the many in A-E’s large dance company.

Troutman did a lot – football, wrestling, basketball, baseball and track and field – and stood out, plus was a team captain in all but basketball.

“It kept me busy,” answered Troutman with a smile, “and I love sports. It was something to do that nobody else did. I don’t know if anyone else has ever played that many sports at Austin-East in one year.”

Throw in his Advanced Placement classes, an internship at Knoxville Orthopedic Clinic the first semester and a job working at Buddy’s barbecue restaurant on Magnolia during wrestling and basketball season, and Troutman’s busy year was even more remarkable.

“It was kind of hard, but I did it,” he said, looking back during a break between summer school classes at the University of Tennessee in Knoxville last week.

Time management was a key. “I didn’t have my time managed my sophomore and junior year,” he said.

Officially, he is Dennis Troutman III, named after his father and grandfather, who both played at Austin-East. Many, including his mother, Shetara Troutman, and 12-year-old brother, JaKobi, call him “Tre.”

Prior to his senior year, Tre tragically lost his dad, who passed away on July 23, 2012, following a heart attack and complications. He was 40.

After football season, Troutman was presented the Eddie Courtney Courage Award for how he had overcome the loss of his father.

“He was known mostly for football,” said Tre. “He did wrestle and play baseball.”

Tre said his dad, who went by the name Jabbar, was an outside linebacker at Middle Tennessee State University, where he played until suffering an ankle injury his junior year.

“He didn’t really want to go to class and stuff,” said Tre, “so he pushed me to go to school harder. And now I’m here in summer school.”

This fall, Troutman will start attending UT-Chattanooga, where he plans to walk on in wrestling. He plans to major in athletic training or nutrition, then do post-graduate work in the field of physical therapy.

“I might be Doctor Troutman one day,” he said, again smiling.

When asked what his favorite sport is, Tre answered, “It’s gotta be between wrestling and football.” He spent more time wrestling (three years) than playing basketball at A-E, because “wrestling got you better prepared for football,” he said.

A 5-11, 250-pounder, Troutman played mainly center and defensive tackle last fall as he earned All-District 3-AA honors for the second time. The Roadrunners (3-7) didn’t make the playoffs, but Troutman recalled a couple of special individual moments.

“I had a blocked punt return for a touchdown against Brainerd, the only touchdown of my life,” he said.

“I also got the ball back for us against Pigeon Forge. They were in victory formation, and I smacked the ball out of their center’s hands. We went down and scored and won the game. They still can’t stand me in Pigeon Forge.

“Everybody said I was offsides, but he moved the ball. I watched the video. He moved it.”

Troutman said his most satisfying individual accomplishment of the year was “going to state in wrestling.” He also takes pride in “sticking with baseball the whole year because we didn’t win any games.”

Troutman pitched, played first or third base and hit fourth in the batting order.

Competing in the 285-pound heavyweight class, Tre finished fourth in the region wrestling tourney after “I poked myself in the eye going to pin the guy. I would have had third place. That was my blooper of the year.”

Troutman said he was attempting to put his opponent in a “half-nelson” when he accidentally poked his eye.

Tre joined up with the A-E basketball team after wrestling season ended. A power forward, he was utilized mainly for rebounding. “I thought we would go to state in basketball, but we lost to Gibbs.”

In his first year in track and field, Troutman took second place in the shot put in the KIL.

Outside of athletics, Armstead noted Troutman was a member of the 100 Black Men of Greater Knoxville and the Academic Enrichment Club, an AVID student, an Austin-East Ambassador, in Upward Bound, a Just Lead Counselor through Emerald Youth Foundation and a volunteer at Sarah Moore Greene Elementary School.

“Dennis is one of the best all-around students you will ever meet,” added the A-E athletic director. “Every adult in this school thinks he is the greatest kid . . .”

Such praise is rare, noted Armstead.

So is being a five-sport letterman.