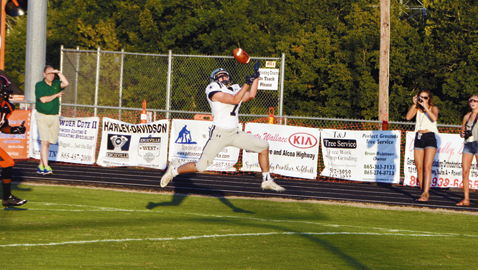 Photo by Dan Andrews.
Farragut’s Cole Morgan pulls in a touchdown pass in the Admirals’ 49-6 win over Powell Friday at Scarbro Stadium. Morgan’s scoring reception culminated an 8-play, 88-
yard drive and was the first score of the game.

Farragut High School football coach Eddie Courtney couldn’t have scripted a better beginning for the 2015 season. The Admirals scored early and often and dominated the action.

And when the dust had settled, Farragut notched a big road win over Powell Friday night at Scarbro Stadium.

“I challenged our kids to compete and they did,” Courtney said. “We had two good weeks of practice and our kids needed something good to happen and it did.

“We also got some kids a chance to play and that’s always good to see early in the season.”

The Admirals (1-0) scored on their drive when Jacob Naumoff connected with Cole Morgan on a 28-yard scoring strike midway through the first quarter. Carter Phillipy’s extra point made the score 7-0.

The first drive was especially big for Naumoff, Farragut’s senior quarterback, who misfired on his first passing attempt but bounced back with five straight completions on the drive, which consumed just under 2 ½ minutes.

“I was a little nervous coming into the game and that’s why that first past sailed on me,” Naumoff said.

Farragut’s defense all but stifled Powell’s anemic attack and forced seven turnovers. Admirals’ defensive back Justin Kirkendall had three interceptions before halftime, after having just one interception. All three of Kirkendall’s picks set up touchdown runs by senior Tanner Thomas, one of Knox County’s premiere running backs.

Thomas scored his first TD of the night on an 11-yard run with 49 seconds remaining in the opening frame.

His next scoring dash came just 50 seconds into the second quarter and covered 22 yards to extend the visitors a 21-0 lead. Thomas scored again on a 5-yard run a short time later to make it 28-0.

Thomas’ final score came on a 3-yard plunge with 2 minutes, 32 seconds remaining in the second stanza.

The Admirals added another score when Naumoff hit Michael Travis from 56 yards out just before halftime to make the score 42-0.

The second half was played with a running clock but Farragut’s Amon Johnson scored the Admirals’ final touchdown on an 11-yard run with 3:23 left in the third quarter.

Powell scored a late touchdown to get on the board with 11 seconds left in the game.

Next up for Farragut is its home opener against Gibbs Friday night at Clabo Field. The Eagles opened the 2015 campaign last week at Campbell County and escaped Jacksboro with a 12-7 victory.

Meanwhile, the Panthers will begin a three-game road trip at Bearden Friday night. The Bulldogs routed Karns 50-7 last week. Powell will then play at Gibbs. They’ll have an open date before traveling to Bill Wilson Field to take on defending Class 5A State Champion West High on Sept. 18. The Panthers will return home on Sept. 25 to entertain Hardin Valley Academy.