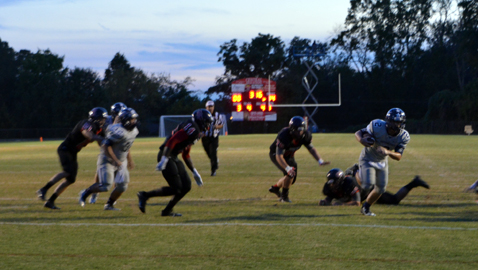 The Knoxville Central Bobcats knew that upsetting undefeated Anderson County would be a tall order.

In fact, it was too tall…

On Thursday, October 2nd, the Mavericks rolled over the Bobcats 59-35.

After the Bobcats went three and out on their opening possession, the Mavericks took over on their own 38.  It only took two plays for them to get on the scoreboard.  First quarterback Zane Smith ran for 12 yards.  Then, he ran untouched for 50 yards and into the end zone.

The game was only 71 seconds old, but Anderson County had a 7-0 lead.

After another Bobcats possession ended without a first down, Anderson County (7-0, 6-0 in District 3-AAA) wasted little time before getting in the end zone again.  Smith ran 39 yards down to the Central 10.  Two plays later Matt Fox, one of the best running backs in East Tennessee, ran it 8 yards for their second score.

On the Mavericks next possession, they started at their own 23 yard line.  But seven plays later, Garrett Johnson took the snap out of the shotgun and ran it up the middle for his second score of the game.  With 3:13 to go in the first, it was 21-0 Mavericks.

Things went from bad to worse on the Bobcats next possession when Austin Kirby’s pass was picked off by Evan Green and brought back to the Central 14.  On the next play, Smith faked the handoff and right around the right side for his second touchdown of the night.  There was still 1:36 to go in the first but Anderson County was up 28-0.

But give credit to the Bobcats because they were not quitting.  With 10:45 to go in the first half, Jadarius Sackie plunged over the goal-line and Central (3-3, 2-2 in District 3-AAA) was on the board, trailing 28-7.

The bad news was that it only took less than a minute for Anderson County to score again.  Matt Fox scampered 48 yards up the middle, and it was 35-7 at the 9:50 mark.

As you can tell by now, there was no shortage of offense on this night.

Central’s Cedric Washington switched fields a couple of times on a 46 yard kickoff return… and then Jeremiah Howard switched fields for a 19 yard touchdown run.  The two most entertaining runs of the night made it 35-14 with 9:18 to go in the half.

Fox extended the Mavericks lead again with a 29 yard run up the middle with 8:49 to go in the half, and it was 42-14.  He scored his fourth touchdown of the half with 52 seconds to go in the second quarter, a 59 yard effort.

Mercifully, the first half was over, as the Mavericks led the Bobcats 49-14.  Quarterback Zane Smith had 204 yards and Fox was at 195 yards on the ground.

And there were still 24 minutes to go.

The beat went on for the Mavericks third quarter as Smith threw to Johnson on a 42 yard pass play with 8:24 to go in the third quarter, making it 56-14.

The Bobcats got those points back when Kirby threw to Howard, who then broke multiple tackles on a 56 yard pass play, and it was 56-21.

Much of the second half was played with a running clock, but didn’t cause Central to stop playing hard. Sackie’s short rushing touchdown and the ensuing two point conversion made it 59-29 with 4:00 to go.  A 19 yard pass play from Kirby to Matt Randolph completed the scoring.

Next Friday night Anderson County will travel to Knoxville Catholic in a battle of unbeaten state powers, while Knoxville Central will try to bounce back as they host Clinton.