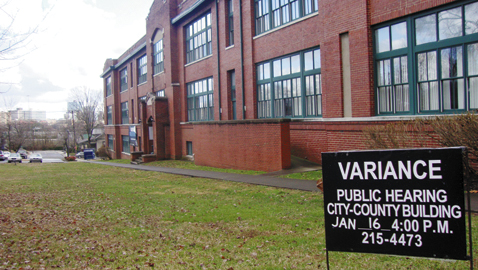 Photo by Mike Steely
The old Moses School in historic Mechanicsville may become apartments for senior citizens. The school is currently owned by the Boys & Girls Club of Knoxville and could house one-bedroom apartments for people 62 years and older.

Thursday was a busy day for proponents of converting the old Moses School building in Mechanicsville into senior apartments. The Historic Zoning Commission heard from them at 8:30 in the morning and the Board of Zoning Appeals heard from them at 4 p.m.  Now they must face a second reading before the City Council.

The original Moses School, at 22 Carrick Street, dates back to 1875 as the Fairview School and has been the community’s focal point. Currently owned and used by the Boys & Girl’s Club, which is closing the facility, the old school is also used by the Knoxville Police Department as a training facility. The current school was completed in 1930.

Demitri Damascus of the American Hellenic Educational Progressive Association National Housing Corporation is working to buy the old school from the Boys & Girls Club and he told the Historic Zoning Commission that his company is a not-for-profit corporation with over 90 senior living facilities around the nation. If the plan gains final approval, the plans are to renovate the main school building and also add a four-story building with an appearance much as the old school.  Eventually the old and new buildings may have about 78 one-bedroom apartments for adults 62 or older.

Arthur Seymour, Jr., also of AHEPA, explained the plan is not for assisted living and each apartment will have a kitchen, living area, and one bedroom.

There has been opposition from the Mechanicsville home owners but the corporation altered its plans last week to move the location of the new building a bit to keep green space for local use and to avoid blocking the view of the front of the historic building. There was also some initial opposition to the company wanting to demolish the old gymnasium but the idea was accepted. Another objection was that the new residents in the apartments would double the number of people living in the neighborhood.

The parking spaces will be reduced from 88 to 50 and a utility building there currently may or may not be replaced. The reduced number of parking spaces is because many of the elderly tenants will not be driving.

The project gained support from Knox Heritage and the Old Mechanicsville Neighborhood Interest group (OMNI), but did face opposition from other residents who presented a petition to the Historic Zoning Commission against the project. One person said the school should be “moth balled” and kept for some appropriate future use. The Historic Zoning members split their vote 5-2 to allow demolition of the gymnasium but voted 7-0 on the design approval.

Cathy Gonzales of OMNI said her group met in December and unanimously approved of the project.

Apartments in the new and old building will rent for $ 450 to $ 650 a month and renovation and construction could begin next year and take 12 to 18 months to complete.

John Dempster, representing the Boys and Girls Club, said that one of the reasons to seek a buyer for the old school is that the Knoxville Police Department’s training facility is moving out and the club will be losing the funding that renter has been paying.

Kaye Graybeal, Historic Preservation Planner for the Metropolitan Planning Commission, asked the corporation to alter the color of the bricks planned for the new building to match the old school.