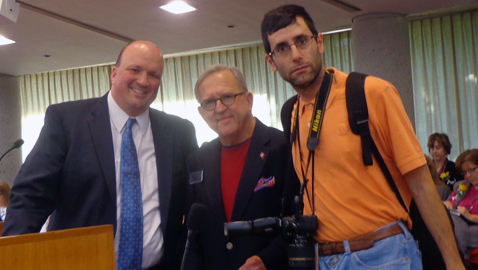 On Monday, the two worlds of politics and Parkinson’s combined. Local activist Alan Zimmerman received a proclamation on behalf of Parkinson’s organizations from the Knox County Commission in recognition of Parkinson’s Awareness Month. Before the meeting, he requested that I stand with him as I am open about my battle with Parkinson’s as well.

Alan is a political community activist (a citizen watchdog).  He attends local political meetings, asks questions, reports concerns from neighbors, and keeps up with what is going on in local government.  Alan is also a strong voice in raising awareness and finding a cure for Parkinson’s research. He has Parkinson’s, and he is very open about it.

Alan has taken his insight into how government works and uses that information to help bring action and awareness to the fight for finding a cure. For example, at a recent West Knox Republican Club meeting, Alan cornered Congressman Duncan’s Chief of Staff, Bob Griffitts regarding a new protocol for the National Institute of Health.  Alan then went into detail of the exact bill, location, and plan of action that was needed.  He made sure Mr. Griffitts wrote everything down. Trust me, there was no way that Mr. Griffitts was going to forget. Alan would surely make a follow-up call in the morning.

As I watched Alan’s hand shake rapidly at the podium Monday, I could only think of one thought while standing next to him. “I wish we had more Alan Zimmermans in this world.”