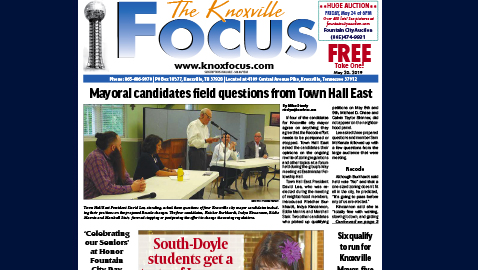 If four of the candidates for Knoxville city mayor agree on anything they agree that the Recode effort needs to be postponed or stopped. Town Hall East asked the candidates their opinions on the ongoing rewrite of zoning regulations and other topics at a forum held during the group’s May meeting  at Eastminster Fellowship Hall.

Town Hall East President David Lee, who was re-elected during the meeting of neighborhood members, introduced Fletcher Burkhardt, Indya Kincannon, Eddie Mannis and Marshall Stair. Two other candidates who picked up qualifying petitions on May 8th and 9th, Michael D. Chase and Calvin Taylor Skinner, did not appear on the neighborhood panel.

Lee asked three prepared questions and member Sam McKenzie followed up with a few questions from the large audience that were meeting.

Although Burkhardt said he’d vote “No” and that a one-sized zoning doesn’t fit all in the city, he predicted, “It’s going to pass before any of us are elected.”

Kincannon said she is “totally fine with waiting, slowing it down, and getting it right.” She said that portions of the Recode proposals will help with affordable housing.

“I’d have to vote no,” Mannis told the audience. He proposed breaking the proposed zoning changes down into sections, starting with a review of the residential regulations.

Stair, the only current city council member running for mayor, said while it is time to update the regulations he wants to postpone it. “Let’s keep with it until we get it right,” he said.

Kincannon said that the city’s expenses are “outstripping” incoming revenue. She said the city needs more large events like the Bassmasters Classic Tournament to help replace dwindling funds from the state Hall Tax.

Mannis lamented the upcoming retirement of the city’s finance director, Jim York. He also said the pension fund is underfunded and said the city must be run effectively and efficiently.

Improving relations with the state legislature would help with city income according to Stair who said it “seems like there’s been a war on cities.” He was referring to the decreasing Hall Tax being paid back to the city.

Burkhardt mourned losing revenue by the ending of Boomsday and suggested starting it again and moving it to the World’s Fair Park. He said large events draw visitors and increase local revenue.

“What happens at Chilhowee Park is key,” Mannis said. He said the city needs to think big and the venue has lot of potential. He said the park’s master plan should be ready in the next month or so and noted that a half-million people visited Zoo Knoxville last year.

Burkhardt said he supports the Magnolia effort “as long as we’re not displacing people.” He said that East Knoxville is “vital to the city” and added he’d love to see a Walmart or Kroger locate there.

Kincannon said the city cannot thrive unless East Knoxville thrives. She said the area has “plenty of room” for new businesses and new residents. She said that Chillhowee Park needs “more green space” and the city should look to partners and the federal government. She’d like to create an “opportunity zone with tax breaks to help investors.”

Stair said the city faces “a two-headed monster” there and suggested creating residential and office spaces there and engage the community. He also said the state should be urged to create a better exit system from I-640 to the mall. He chided the current mall owners who he said has made little effort to improve the mall.

Burkhardt questioned if the property could be used to create a new Smokies Stadium and suggested the building become a multiple use facility that could house the city government.

“It’s not thriving,” Kincannon said, who offered to use the mayor’s office as a “bully pulpit.”  She added that it wasn’t right for people to buy property at a great discount and then hold it without use.

Mannis said the mall has been “squandered” and suggested a multi-use facility with family housing and possibly using the mall buildings to house city and county offices.

At the close of the meeting President David Lee reminded the audience of the upcoming fund raiser “Burlington Vibe” set for June 13th at 3606 Martin Luther King Jr. Avenue. He also said that the Knox Heritage Summer Supper is planned for July 20 at Cal’s Speakeasy on Speedway Circle.