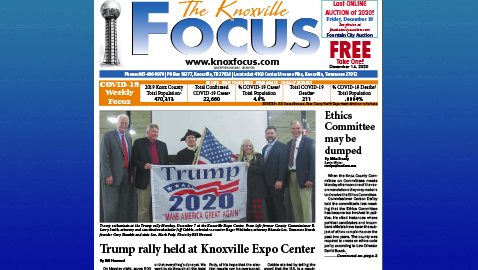 On Monday night, some 500 vociferous supporters let it be known how badly they hope Donald Trump remains president.

Republican state Sen. Mark Pody, who represents the state’s 17th district, organized the rally at the Expo Center. He’s done so at other locations across the state.

“We’re excited about being here,” said Pody. “We know the election is over but that doesn’t mean all the ballots are counted or that everything’s done yet. We want to go through all the legal processes to make sure that everything is done properly.”

On Nov. 3, Joe Biden defeated Trump in the presidential election by several million votes, and an electoral college advantage of 306 to 232. Trump’s campaign is contesting the results, claiming election irregularities, especially in various battleground states. The case might be headed to the Supreme Court.

“We’re very confident,” said Pody, of his hope that the election results can be overturned. “We are not done, we are not giving up. Just because we feel it’s being called one way, we want all the court cases to be heard and we feel that we’re gonna be victorious in the end.”

The event didn’t consist entirely of Trump cheerleading. Attorney and Constitutional scholar Jeff Cobble gave the crowd a lesson on the nation’s founding document, and how various parts of it could possibly help Trump stay in office.

Cobble started by telling the crowd that the U.S. is a republic, not a democracy, and that the president and vice president are selected by electors, not the people directly.

According to Cobble, in 35 states, including Tennessee, electors are not required to vote for the candidate that won the state’s popular vote. If, after the electors’ votes are counted, no candidate wins a majority, the election goes to the House of Representatives, where each state has one vote.

Currently the Democrats have a majority of the House’s 435 members. But each state’s vote can be determined by a majority of its electors. If, of Tennessee’s 11 votes, six or more vote for Trump, then Tennessee’s one vote for president goes to Trump.

Cobble told the crowd, to great applause, that at the moment a majority of states have Republican-dominated legislatures. Presumably, a majority of the 50 states’ individual votes could go for Trump.

Said Cobble: “In Georgia and Pennsylvania and all the battleground states we need to be pressing the state legislatures, especially those that are under Republican control that they need to exercise their own authority to pick the electors and not allow people to select the electors. They have every constitutional right to select them themselves.”

The rally, like any such event, had its circus-like element. In response to one of the speakers, colonial re-enactor Roger Whittaker, wearing 1770s garb, stood up and began loudly chanting “stop-the-steal,” as he waved his American flag. The crowd quickly chimed in.

As moving as any of the speakers was Tennessee Stands founder Gary Humble. Only a few months old, Tennessee Stands is, according to its mission statement, a “nonprofit social advocacy organization that serves to protect the individual liberties of all Tennesseans as stated in the Tennessee State Constitution.”

“We are in a war that has been going on now for quite some time,” said Humble. “This is not just about an election. This is about a fundamental global shift in the takedown of what you and I know as America.. The doctrine of non-resistance against arbitrary power and oppression is absurd and slavish. Here’s what that means: You and I as Tennesseans have a duty to resist arbitrary power.”

Humble took a swipe at what many on the right believe is the government’s excessive use of power – both locally and nationally – concerning Covid-19. “Unelected boards of city health don’t make laws,” he declaimed, referencing Knoxville.

“Government overreach,” according to Humble, is why there have been rising national rates of social pathologies, including suicide, depression and child abuse.