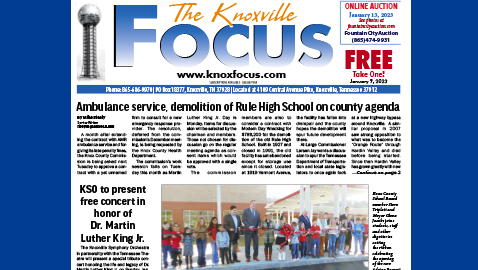 Schools throughout Knox County begin the spring semester today (Jan. 9) and when the first bell sounds, students at Adrian Burnett Elementary School will have a new campus to call home.

And it was a long time coming.

Knox County Schools celebrated the official opening of the new 94,000-square-foot building located at 4521 Brown Gap Road in the Halls Community on Friday.

The day’s festivities began in the school’s 7,100-square-foot gymnasium as the Halls High School band performed.

Knox County Mayor Glenn Jacobs was on hand for the ceremony and recalled meeting with former Knox County Board of Education member Patti Bounds, who recently completed two terms on the board.

“I remember when I first took office and Patti Bounds came to see me,” Jacobs said. “It wasn’t like she was putting any pressure on me, but she said we’ve got to go out and see Adrian Burnett,” Jacobs said.

“I went out there and saw the building. The building was well-loved but it was also well-worn. You had corners in the walls of rooms that were worn and coming apart so you could see into other rooms. I remember going in to see the principal and there was cloth in the air conditioning vents and that was the way they controlled the climate in the building.”

The original Adrian Burnett campus was constructed in 1976 and was intended to be a temporary home for the school.

The new facility includes 34 classrooms, four teacher work areas, two special education classrooms with shared support spaces, the gym (which includes a stage), a music room, an art room, a library and a tornado shelter than can house up to 935 occupants.

The new campus can serve up to 800 students.

Bounds also lauded the community members for their patience.

“The people of the Adrian Burnett Community persevered and believed and hoped this day would come, and today, it’s here,” Bounds said.

Adrian Burnett principal Stephanie Prince is pleased that her students and staff will have the new facility.

“Now people on the outside can see how beautiful we are inside,” she said. “I’m very humbled to be the one to be here for this.

“But we’re still getting it ready and I’m thankful for my staff.”