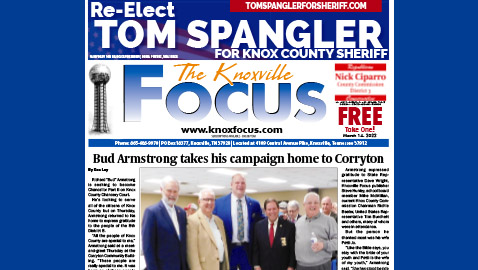 He’s looking to serve all of the citizens of Knox County but on Thursday, Armstrong returned to his home to express gratitude to the people of the 8th District 8.

“All the people of Knox County are special to me,” Armstrong said at a meet-and-greet Thursday at the Corryton Community Building. “These people are really special to me. It was because of these people that I got to go to college.

“They wrote checks. They saw something in this country boy. What, I’ll never know.”

Those checks helped Armstrong, who previously served as the Knox County Law Director, complete his education. He holds a Bachelor’s Degree, a Master’s Degree and a Ph. D.

He also went to law school.

As law director, Armstrong prided himself as the people’s law director. If he is elected to Chancery Court, he will continue to be a faithful servant to the citizens of Knox County.

“Now, I want to be the people’s chancellor. I have District 8 values and I believe in the law. I believe in letting you raise your kids. I don’t believe the government should do that.”

As part of his traditional values, Armstrong said “I believe in the law.”

“This is a government by the people, for the people and of the people,” he added. “The government belongs to the people. That’s how our country was founded. I don’t believe you should legislate from the bench.”

But the person he thanked most was his wife Patti Jo.

“Like the Bible says, you stay with the bride of your youth and Patti is the wife of my youth,” Armstrong said. “She has stood beside me through thick and thin.

“We’ve been married for 45 years and she supported me while I got my education and she’s taken me places around the world.”

Armstrong’s work has also taken him around the globe but he said that District 8 will always be his home.

“I’ve worked all over the world,” he said. “But I always find my way back here.

“I love you all and I mean that from the bottom of my heart.”