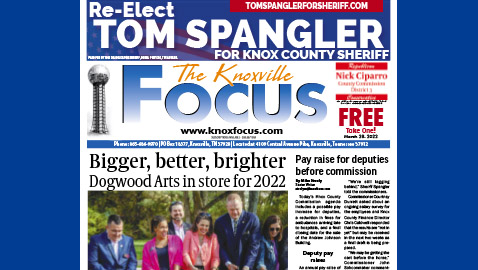 Pay raise for deputies before commission

Today’s Knox County Commission agenda includes a possible pay increase for deputies, a reduction in fines for ambulances arriving late to hospitals, and a final closing date for the sale of the Andrew Johnson Building.

An annual pay raise of 2.5% for sheriff’s deputies is before the commission this evening and the proposal saw lots of comments during last week’s work session.

Commissioner Kyle Ward questioned the proposed raise asking what would happen if Knox County has a bad year financially. Law Director David Buuck responded that the pay raise could be “canceled down the road.” Commissioner Larsen Jay said the pay raise could amount to an additional $1.2 million needed in the general fund next year.

Sheriff Tom Spangler said that while upper-ranking officers need a pay boost also he’s pushing for the 2.5% to go to employees who are captains or below. He said a pay raise is needed to help recruit and keep employees and noted that the City of Knoxville pays its officers more than the county.

Commissioner Courtney Durrett asked about an ongoing salary survey for the employees and Knox County Finance Director Chris Caldwell responded that the results are “not in yet” but may be received in the next two weeks as a final draft is being prepared.

“We may be getting the cart before the horse,” Commissioner John Schoonmaker commented.

Sheriff Spangler said the county would need to raise the pay for officers by 7 to 8% to be competitive with the city.

There were questions about the proposed pay increase for deputies and if that included the annual pay raise to all Knox County employees and if it included bonuses.

Commissioner Randy Smith said any bonus given to officers aside from a 2.5% pay increase is like “Halloween candy that’s gone the next week.”

The sheriff was asked by Commissioner Larsen Jay to return to the commission with data on salaries, the number of officers, and provide a “baseline” for consideration.

Ward said the pay raise request may need to be postponed until the salary survey and study is available. The pay increase will require two readings and could be pending until that report is returned.

The increase in new residents in Knox County is outpacing the number of new homes and apartments.

Hancen Sale of the Knoxville Area Association of Realtors reported the cost of homes and rent has increased 20 percent and that is outpacing the nation and cities like Chattanooga and Memphis.

He presented a multi-page report and said that many homes up for sale are unaffordable for many people on medium income and that 17,000 more home units are needed. He said the incoming population boom and the number of “boomers” retiring also affect the housing market.

Commissioner Smith commented that the county has lost major employers “because we didn’t have the housing.”

Jay said that the permit policies need to “be expedited” and the count is missing middle diversity and single-family homes.

In a related matter, the commissioners approved a $20.7 million award from the U.S. Treasury Department for Emergency Rental Assistance.

The closing selling date for BNA Associates to buy the historic Andrew Johnson Building was delayed in a First Reading by the commissioners. The motion, by Smith and Jay, would give three Knox County offices time to find office space.

Area hospitals have been understaffed through the pandemic and AMR ambulances are often backed up outside hospital emergency rooms.

Kevin Parton of the Knox County Health Department told the commissioners that hospitals have been “very strained” and the problem has been “beyond our control.” He said the backup has been so bad that patients have been permitted to choose to go to another hospital if space there is available.