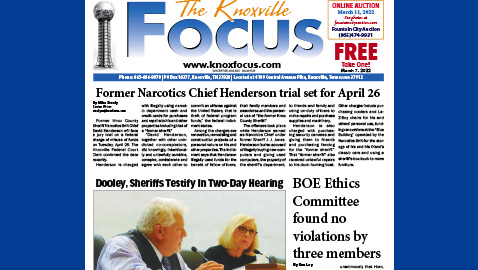 Henderson is charged with illegally using narcotic department cash and credit cards for purchases and repairs to his and other properties including that of a “former sheriff.”

“David Henderson, together with other unindicted co-conspirators, did knowingly, intentionally and unlawfully combine, conspire, confederate and agree with each other to commit an offense against the United States, that is theft of federal program funds,” the federal indictment states.

Among the charges are renovation, remodeling and construction projects of a personal nature on his and other properties. The indictment says that Henderson illegally used funds for the benefit of fellow officers, their family members and associates and the personal use of “the former Knox County Sheriff.”

The offenses took place while Henderson served as Narcotics Chief under former Sheriff J. J. Jones. Henderson is also accused of illegally buying new computers and giving used computers, the property of the sheriff’s department, to friends and family and using on-duty officers to make repairs and purchase supplies and machinery.

Henderson is also charged with purchasing security cameras and giving them to friends and purchasing fencing for the “former sheriff.” That “former sheriff” also received unlawful repairs to his duck hunting boat. Other charges include purchasing coolers and La-Z-Boy chairs for his and others’ personal use, funding renovations at the “Blue Building” operated by the Narcotics Unit for the storage of his and his friend’s classic cars and using a sheriff’s box truck to move furniture.