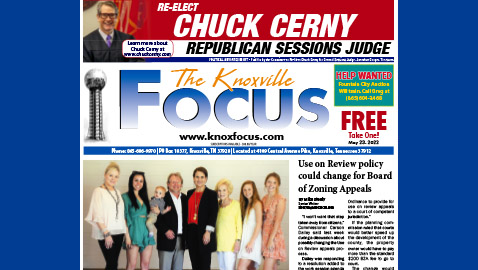 A zoning change for two adjoining pieces of property in South Knoxville was approved in a split 8-3 vote following a change in the request at the regular meeting of the Knox County Commission.

The motion to authorize Thunder Mountain Properties LLC to build 250 plus homes along Sevierville Pike came from Commissioner John Schoonmaker. He moved to approve to permit 180 homes on a level 64 acres and, when platted, 77 units to be built on a hilly back portion involving 95 acres.

Local residents of the Dry Hollow area turned out in force to oppose the development and many spoke against the development, led by their attorney Daniel Sanders. Sanders said in his opinion the commission could not place conditions on a development which is the duty of the planning commission.

Schoonmaker’s motion included no “clustering” of houses on the level 64 acres.

Sanders and the citizens who spoke urged the commission to either deny the change or send the request back to the planning commission.

That came after Commissioner Terry Hill offered a substitute motion that would have restricted the 64 acres to 2.5 houses, or 160 dwellings. That motion failed in a 5-6 vote.

During the long discussion there were shouts from some local homeowners.

Taylor Forrester, representing Thunder Mountain Properties, said the acres were ideal for such a development and cited water and sewer lines now being available to the area. The large acreage is located at 8802 Sevierville Pike and Dry Hollow Road.

Commissioner Dailey supported the development and said the residents have a right to file an  “Use on Review” appeal with the Board of Zoning Appeals to disagree with the development plans.

That “Use on Review” process for any zoning change was sent back to the planning commission earlier in the meeting. The resolution calls on planners to look at switching the powers from the BZA to the courts and report back to the commission with a recommendation.

Commissioner Larsen Jay said he preferred the planning commission to “kick the tires” on the idea and Deputy Law Director Mike Moyers told the meeting he has “some real questions” about the BZA’s powers to review subdivisions development plans.

“BZA is assumed to have powers they don’t really have,” Moyers said.

Schoonmaker said asking for the planning commission to change the “Use on Review” process is trying to “solve a problem that doesn’t exist.” He was the sole “No” vote in sending the matter to the planners for recommendations.