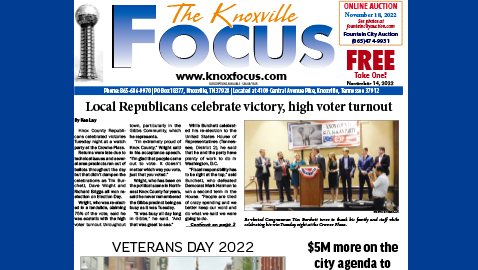 Returns were late due to technical issues and several area precincts ran out of ballots throughout the day but that didn’t dampen the celebrations as Tim Burchett, Dave Wright and Richard Briggs all won re-election on Election Day.

Wright, who was re-elected in a landslide, claiming 75% of the vote, said he was ecstatic with the high voter turnout throughout town, particularly in the Gibbs Community, which he represents.

“I’m extremely proud of Knox County,” Wright said in his acceptance speech. “I’m glad that people came out to vote. It doesn’t matter which way you vote, just that you voted.”

Wright, who has been on the political scene in Northeast Knox County for years, said he never remembered the Gibbs precinct being as busy as it was Tuesday.

“It was busy all day long in Gibbs,” he said. “And that was great to see.”

While Burchett celebrated his re-election to the United States House of Representatives (Tennessee, District 2), he said that he and the party have plenty of work to do in Washington, D.C.

“Fiscal responsibility has to be right at the top,” said Burchett, who defeated Democrat Mark Harmon to win a second term in the House. “People are tired of crazy spending and we better keep our word and do what we said we were going to do.

“Our party has to be more fiscally responsible.”

Briggs, who handily defeated Democrat challenger Bryan Lanagan for the District 7 Seat in the state Senate, was battling hoarseness on the election night. While he didn’t stick around long at the celebration, he made some brief but passionate remarks to a crowd of supporters and well-wishers downtown.