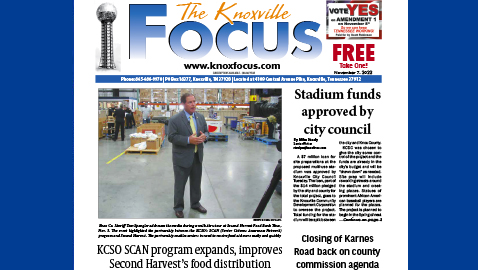 This past summer Second Harvest formed a partnership with the Knox County Sheriff’s Office that will make its mission even more important and valuable.

SCAN – Senior Citizens Awareness Network – is an organization of volunteers that operates under the aegis of the KCSO. Its mission, according to Sam Compton, Youth and Senior Programs Manager for Second Harvest, is to “go out into the community and connect with seniors … they do welfare checks, they do community referrals, just a range of services.”

Before this summer’s partnership with Second Harvest, a SCAN officer, upon determining a need for food for a senior citizen during a checkup, would refer the senior to a local food distribution outlet.

SCAN’s partnership with Second Harvest expedites that process. “Now they see that food need,” said Compton, “the food that we’re providing them in these prepacked bags goes directly to them. When there’s a food insecurity situation going on, we meet that need immediately.”

On Thur., Nov. 3, Second Harvest had a walk-thru tour of its facility on Harvest Lane in Maryville. Compton and others described to the crowd the various operations and functions the huge warehouse-type facility provides.

Knox. Co. Sheriff Tom Spangler was in attendance. The SCAN-Second Harvest partnership required his approval, which “was an easy decision,” Spangler said.

“We’re in partnership with (Second Harvest),” said Spangler. “Helping them out as best we can to get donations to help them keep everything going. Also, they’re helping us as far as the Knox Co. Sheriff’s Office. They’re able to give those individuals in our community that are either having trouble buying groceries or whatever it may be, monetarily or anything like that.”

According to Cpt. Michael Evans, Special Services Commander of the KCSO, SCAN has been providing services for 27 years. “At that time they saw a huge need for assistance with the senior citizens,” Evans said. “In doing so, the department wanted to do something in a community-oriented policing type way. They wanted officers to go and check on them. As their needs increased, the department started doing more for them.”

Contributions and volunteers, of course, are vital to Second Harvest’s survival. Individuals and institutions can donate either money or food. According to Madison Harmon, communications and digital media manager for Second Harvest, the organization can turn a dollar into far more food than an individual can from the grocery store.

“A dollar stretches pretty far but we’ll never say no to a donated product,” said Harmon. She also said that in 2021, volunteers put in some 25,000 hours, saving an enormous amount of money that would otherwise have to go to hiring staff.

Included in Thursday’s tour was a food-box packing demonstration that SCAN officers participated in.

“We hope to do this (SCAN partnership) for a long time,” said Spangler.