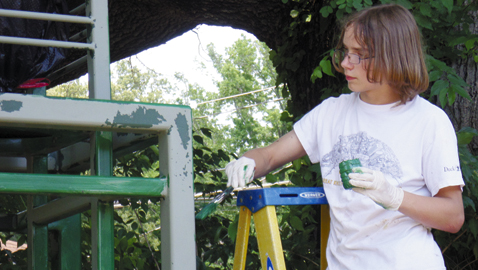 Nicholas West worked on earning his Eagle Rank with Boy Scout Troop 506 in Halls – Knoxville by refurbishing the main gate at Fountain City Park as well as sanding and painting two bridges that enter the park from the Broadway.

Fountain City Park got a bit of a much needed face lift, courtesy of an area Eagle Scout candidate recently.

Nicholas West, an 18-year old Halls resident undertook the project, which was a requirement for earning the Eagle Scout ranking from Boy Scouts of America.

West, a recent Bearden High School graduate and member of BSA’s Troop 506, which meets at Christ United Methodist Church in Halls, refurbished the main gate at the park and sanded and painted two bridges at the park’s Broadway entrance. He accomplished the renovation with the help of a few friends. He also did some work on the main emblem at the park.

“It took 15 hours and a lot of people came and went,” West said. “It wasn’t really that difficult but it was relatively expensive.”

He said he was encouraged by his grandfather, Jim McFarland, a past District Governor of the Lions Club.

“My grandfather suggested the idea to me because it was falling apart,” West said.

He said that he chose to renovate the park because it has a special place in his heart.

“The park is close to home and I visit the park,” West said. “We painted the main entrance twice, did some work on the main emblem and we painted the metal on the two boardwalks.”

The project didn’t happen quickly. West said that he scheduled a work day two weeks in advance and rain delayed his work.

The cost of the renovation was relatively high but West and McFarland received a donation of paint and brushes from Home Depot.

West said he was grateful for help from an area business.

“Home Depot gave us several gallons of paint and some paint brushes,” West said. “And I would just like to tell them ‘thanks.’”

McFarland was able to help his grandson secure the donated materials but said that West deserved the majority of the credit.

“I’m proud of him,” McFarland said. “He did all of the talking.

“They only asked me what color we had to have.”

West noted that McFarland had dealt with Home Depot before.

It was a vast undertaking but West had little trouble completing the project, aside from the rain and planning.

“It wasn’t all that difficult,” West said. “But we had to plan the work day two weeks in advance and that kind of built up the suspense.”