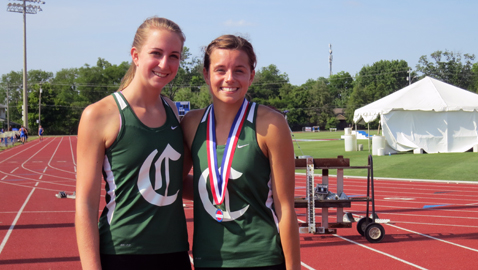 Track and field is often thought of as an “individual” sport, but it has “team” players, too.

Three days later, the Catholic senior went all out in anchoring the Lady Irish’s 4×800 relay team to a state title and school record, even though she knew her efforts would slow her time in the 100-meter hurdles event that would soon follow.

“Camille ran her personal best time ever and didn’t have enough recovery time for the hurdles,” said Catholic Coach Brandon Harris. “She gave up her own potential glory in the 100 hurdles for her relay team. That says something about her character.

Annie Batcheller ran the leadoff leg, followed by Rosa Cinceros, Gabby Prevost and Baker. The foursome combined for a time of 9 minutes, 41.41 seconds. Christian Academy of Knoxville came in second at 9:44.39.

Catholic still got 10 points in the 100 hurdles as sophomore Camille Mancini won the race in 15.30. Baker came in eighth place to pick up one point.

Baker also took fifth in the 300 hurdles and was second in the high jump.

“She had a pretty good day,” said Harris. “She’s worked hard to get where she’s at.”

Baker has signed with Missouri University of Science and Technology, a NCAA Division II school, and plans to compete in the heptathlon, with the addition of the 200 dash and javelin throw in college.

In Class AAA, Hardin Valley Academy’s Liza El-Ajam, who got took up the shot put event this year after playing softball the past three years, was a surprise winner, edging teammate Tamia Crockett by one-half inch. El-Ajam had a 40-10 mark, while Crockett had a 40-9½ .Farragut sophomore Destiny Carey placed fourth. Crockett, a junior, also placed fourth in the discus event.

Farragut senior Katie Beuerlein, who was seventh in the Class AAA pentathlon, also was fifth in the high jump.

Maya Barroso of West, a Georgia Tech signee who saw her junior season halted by a knee injury last year, took sixth place in the 300 hurdles.