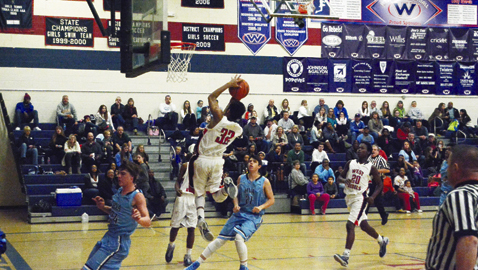 West boasted a balanced scoring attack and the result was a 79-64 District 4-AAA home victory over Hardin Valley Academy.

“We have a young team and sometimes, we have good nights and sometimes we have bad nights,” Kesler said. “We have 10 guys who are even. We need to get better but those guys are about even.

The Rebels got that and a little more against the Hawks, who have lost eight consecutive games. Greg Yarbrough scored 16 points. Shandel Williams added 12. David Kraski scored 11 and Tyrone Patterson finished with 11.

Furthermore, the Rebels got nine points from Kadarius Jack and eight from point guard John Evans in a game that was tied at 18 after the first quarter.

After the opening frame, the contest didn’t remain even for long as West exploded in the second stanza. It was then that the Rebels went on a 23-3 run to open a 41-21 lead and all but put the game out of reach.

Hardin Valley (7-11, 2-5) got a second-quarter basket from Aaron Dykes with 3 minutes, 47 seconds left in the second quarter to pull the Hawks to within 28-20. After that, the Hawks were completely stifled for the next 2:26. They finally scored when Caleb Clevenger made a free throw at the 1:21 mark of the second stanza.

After halftime, the Hawks battled but the deficit would prove to be too much to overcome. HVA coach Keith Galloway praised his team’s effort but said that his team is in the midst of an identity crisis.

“We’re trying to be something that we’re not,” he said. “In the second quarter we tried to slow things down and that’s not who we are.

“We have to speed things up and what happens happens. We’re a speed-up team and we’re going to have to get it and go.”

Hardin Valley did speed things up after halftime and that enabled the Hawks to score the first seven points of the third quarter. They pulled to within 41-28 when Jordan McCroskey made a layup with 6:28 remaining in the third quarter.

The teams played evenly in the third quarter and HVA outscored the Rebels 21-15 over the final eight minutes and that gave Galloway reason for optimism.

“This [the losing streak] is hurting us but I’m hoping that we’ll find our groove around [district] tournament time,” Galloway said. “We’ll find it eventually and when we do, we’ll be hard to deal with.”

Blaine Shockley led the Hawks with 16 points, including 14 after halftime. Tyler Durden added 14.