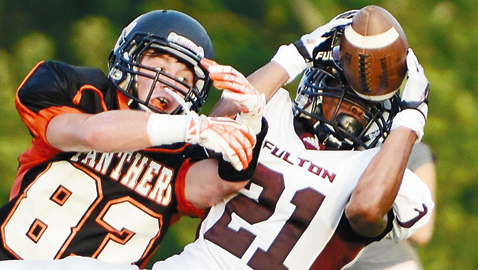 Karns and Hardin Valley Academy became an “instant rivalry” in football just a few years ago, and the Beavers and Hawks will add another chapter to one of Knox County’s newest high school sports rivalries Friday night at Hardin Valley.

“Players from both teams know each other by going to church together, elementary/middle school together, and just living in the same communities. The Karns versus HVA football game always draws a great crowd and has a history of being a closely fought, physical game. I think both sides would agree that even though we are in different districts this year, the players and coaches get extremely amped up for this game. This year should prove no different.”

Karns’ strength this season is “our speed and athleticism,” pointed out Tipton.

Jamerial Parks (FS/WR) also is a key player this season, noted Tipton. “He and his older brother Derek both transferred in from Powell and should prove very important this season for us… Jamerial is an explosive player for us.”

Other top attractions involving local teams this week include Jefferson County at Central in a Rivalry Thursday night clash on MyVLT. It will be the Bobcats’ season opener.

Other headliners pit Fulton at Bearden and Oak Ridge at Farragut. Catholic travels to Coalfield, which is led by junior Zach Stewart, a 6-5, 300-pound lineman who is a UT commitment.

Photo by Eric Kennedy
Fulton WR Domonique Williams (21 in white) out battles Powell’s Andrew Cox (83 in black) for a pass early in Fulton’s 46-0 win over the Panthers last Thursday in the season opener for both teams.

It wasn’t supposed to be that easy for Fulton.  Really.

Powell is a team that is expected to contend for the District 3AAA championship and had looked very good in pre-season scrimmages against both Lenoir City and Jefferson County.

Fulton had only scrimmaged once in the pre-season, against Anderson County, because they couldn’t find anybody else who was willing to scrimmage the high school football powerhouse.

It was pretty evident that the Falcons were locked and loaded from the outset on Thursday night before a huge crowd at Scarbro Stadium and a region television audience watching State Farm’s Thursday Night Rivalry on MyVLT TV.

Marcus Weaver’s 40-yard kickoff return to open the game put Powell in good field position at its own 46.  Fulton’s defense held the Panthers to minus 5 yards on a 3 and out, however, forcing a Panther punt.  Hagen Owenby’s 50-yard boot was fielded over the shoulder by Xavier Hawkins, who returned the punt 50 yards back to the Powell 41.  From there it took Fulton only four plays and 51 seconds to take the lead.  Daryl Rollins scored on a 1-yard plunge, and after the extra point attempt was blocked Fulton lead 6-0 with 8:46 to go in the first.  That would be just the first of three Falcon TDs in the opening quarter.

Fulton’s defense of coordinator Jeff McMillan did its job by stopping the Panthers on downs on the next possession, and then it forced and recovered a Powell fumble on the third Panther possession.  Both times the high flying Falcon offense converted.

Rollins scored on another 1-yard run culminating a four play, 62-yard drive at the 5:16 mark.  This time Josh Coleman’s kick was good, and Fulton led 13-0.

Then after Powell had penetrated Fulton territory for the first time on the next possession, McMillan’s defense stripped the ball from Powell running back Drew Carter and took over at the Powell 49.  Three plays later, 6’ and 257 pound DJ Campbell got in to the scoring act when he blasted through the left side of the line behind mammoth offensive linemen Akeem Cooperwood and Michael Scates going 29 yards untouched into the end zone.  The PAT was no good again, and Fulton now led 19-0.  That score would hold to the end of the first quarter.

Powell’s best chance of the night to get on the scoreboard and perhaps make a game of it came early in the second quarter.

The Panthers took over at its own 33 and drove to the Fulton 10.  Facing 4th and goal, Powell opted to go for the touchdown instead of kicking a field goal.  Owenby had no chance to get a pass off, however, as Fulton’s blitz was in his face.  He threw it up hoping one of his team mates could make a play, but the Hail Mary wasn’t answered.  Fulton’s defense made the play, intercepting the football at the two, killing the potential scoring threat.

Before the first half was over, Fulton would score two more times.

The first came on an electrifying 87 yard run by Hawkins out of the Wildcat formation.

Running around the right side of his offensive line, Hawkins took the snap and never hesitated, scoring on the first play of the possession.  Coleman’s kick made the score 26-0 with 4:11 to go in the half.

Fulton wasn’t done for the first 24 minutes, however.

After holding Powell to another 3 and out, the Falcons took over at its own 28 yard line and began a five play drive that culminated with a 33-yard scoring strike from senior quarterback Penny Smith to Hawkins.  The kick was missed again – one of the few things that Fulton did not do well on Thursday – and the Falcons let 32-0 at halftime.

Fulton rang up 316 yards of offense in the half on just 21 plays from scrimmage – an average of 15 yards every time they snapped the football.  The Falcon defense held Powell to just 136 total yards in the opening half.

As if there were any doubt about the outcome of the game with the Falcons leading 32-0, it didn’t take long for Fulton to completely bolt the door shut.

On the first play of the second half Hawkins worked his magic once again from the Wildcat offense.  His second long TD run, this time from 72 yards, along with Coleman’s point after, stretched the lead to 39-0 just 26 seconds in to the third quarter.  At that point the mercy rule went in to effect with the clock running continuously.

The game’s final score came on yet another long Fulton run midway through the third.

Perhaps feeling a bit left out of the act, Rollins showed why he is being recruited so highly when he took a handoff from Smith and went 80 yards untouched for the score.  Coleman’s kick was good, and Fulton led 46-0 with 6:08 left in the third.

The fourth quarter proved to be an opportunity for both teams to get backups some Friday night playing time, as neither team put any points on the board in the stanza.

Fulton is 1-0 and travels to another 6A school, Bearden, next week.

Powell, 0-1, will play its second consecutive defending state champion on Friday when it travels to Christian Academy of Knoxville, who has won the past 2 class 4A gold balls.

Hawkins led the Falcons on the ground with 159 yards on just 2 carries – both TD runs.  Rollins added 114 rushing yards on his 8 attempts.

Smith completed 5 of his eight pass attempts for 133 yards and the touchdown pass to Hawkins.

Senior Tyshawn Gardin led Powell on the ground with 67 yards on 12 carries.  Owenby’s 10 carries netted 39 yards, and he was 8 of 17 through the air for 41 yards and an interception.

The Falcons amassed 540 yard of total offense for the game, 407 of it on the ground.

Fulton at Bearden can be heard on WKCS FM 91.1.  The Voice of Falcon Football Russell Mayes will have the play by play.

Bill Mynatt is the Radio Voice of Powell Panther Football on AM 620 WRJZ, host of The District, Saturday mornings at 10 on AM 760 WETR.